Founder of Black Guns Matter Speaks Out: ‘Gun Control Is About People Control’ 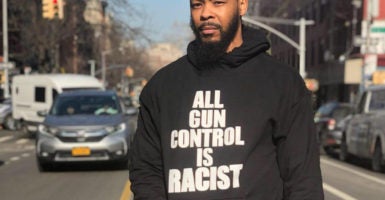 "Most of urban America is conservative in their values, they just don't know what the conservative movement is," says Maj Toure. (Photo via Official Black Guns Matter Page_Maj Toure Facebook page.)

Maj Toure, founder of Black Guns Matter, comes from inner-city Philadelphia, where he teaches black youth about their Second Amendment rights. Read the interview posted below, or listen to the podcast.

Daniel Davis: We’re joined now by Maj Toure. He is the founder of a group called Black Guns Matter. Maj, thanks for joining us.

Maj Toure: Thanks for having me.

Toure: I’m from North Philly. And where I’m from, a lot of times the conversation about firearms is spoken in hush tones. The left has made a very good job of convincing urban America that firearms aren’t for them. The Second Amendment doesn’t relate to them.

So in seeing that, my friends across the country are catching firearms charges. It’s not because they robbed somebody, but because they didn’t know you have to fill out this paperwork because you bought the firearm legally, but here are the carry laws in your particular city or state.

We deal with conflict resolution, de-escalation, and things of that nature, but it started to turn into a whole political situation. Now we’re informing people about the Second Amendment from urban America, expressing or exposing them to conflict resolution and de-escalation as well as getting them politically involved. If you are not politically involved, all of this is for naught.

Davis: Yeah. So tell me about how people think about their own rights when in the inner city, when they think about guns. Obviously, you mentioned, guns are spoken about differently because of their association with crime. How do people understand their own rights?

Toure: They understand their own rights by being presented with the information. A lot of times what’s happening in certain urban demographics is the information, civics are removed from the schools. So from a very beginning space where we had a young impressionable mind that we could identify with conservative ideology and liberty and freedom-based ideology, to be perfectly honest, that information is switched in certain demographics. So that’s the first one, education.

The second thing is getting involved—going to a range, understanding the mechanics and the safety components that go along with firearms, and then seeing if it’s for you.

We’re not an organization that says you have to have a gun right now. What we want you to do is be well informed and educated. And if you decide to have a firearm as a means of protection for yourself, your loved ones, and your family, then you do so.

Gun control is about people control. It’s not about safety. It’s not about making Americans safer. It’s not about respecting our freedoms. It’s about taking large percentages of American populations—urban centers; urban metropolises; New York City, 8.5, sometimes 9 million people—and telling them they do not have the right as stated in the Second Amendment to defend their lives. Our organization is there to push that back and the education and the understanding is how we do it.

Toure: The first thing is, you have to understand that most of urban America is conservative in their values, they just don’t know what the conservative movement is. That’s one.

What happens a lot of times is our ego says, “Well, I have the truth, I’m right. I’m factually accurate.” You’re not factoring in the PR that’s been put on a demographic that you want to reach to, even if the information that you have is accurate, and what help that demographic and in turn help America.

What the conservative movement can do is link up with organizations like Black Guns Matter that are already in and we have a trust system. I’m from the place. It’s breathing to me. Other than that, you’re going to be spinning your wheels, you know what I mean? So you got to get behind it.

And my demographic supports people that go, “Hey, we’re supporting and getting behind this work.” And my demographic goes, “Oh, this is cool?” “Yeah. They got a lot of information that you should be on.” You have to have liaisons. That’s true in any scenario. So I think that’s what the conservative movement can do a lot more to get a lot better at that, a lot better.

Toure: Absolutely optimistic, absolutely optimistic. The reason why there’s optimism is because of the fact that it’s what we’ve already done. You go to our classes, it’s not just at the range and just teaching somebody about stance, grip, sight alignment, and things of that nature. A firearm is a tool, a tool to defend freedom.

My point there is there’s an identification with the concept. It’s just the people that are there to present the information before we started doing this work were far and few in between. So there’s hope because … when we present our classes, we’re presenting information that is legit, that we can go, “Yo, hop on your phone right now and don’t believe me, research it.”

When you tie those dots and connect those dots and cross those T’s and dot those I’s, my hood, all hoods across America go, “I understand this, I relate to it. Now I have a label for it.”

Davis: Maj Toure, I really appreciate you coming on. Where can folks find your website?

Toure: For one, people can come get at me on all social media at @MajToure. And if something that I’ve said to the people that are listening right now, if there’s something that you agree with and if you want to support, our classes are free, based on everyone paying it forward.

If you want to go to GoFundMe.com/blackgunsmatter, donate $5, donate $50. If you one of these super-rich guys and women walking around here donate $50,000, it’ll help a whole lot to do the work that’s necessary for us to preserve our liberties and our freedoms.

Davis: All right. Maj Toure, thanks so much for joining us.

Toure: Thank you for having me.