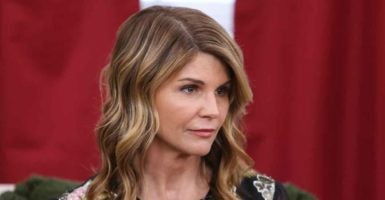 Actress Lori Loughlin and husband Mossimo Giannulli face accusations of accepting an agreement to pay $500,000 in bribes so their two daughters could attend the University of Southern California as recruits for the crew team though neither has ever played the sport. Pictured: Loughlin at Hallmark's "Home & Family" at Universal Studios Hollywood, Dec. 19, 2018. (Photo: Paul Archuleta/Getty Images)

Federal prosecutors have charged more than 50 people involved in cheating and bribery in order to get their children admitted to some of the nation’s most prestigious colleges and universities such as Georgetown, Yale, Stanford, University of Texas, University of Southern California, and UCLA. They often paid more than $100,000 to rig SAT or ACT exams.

In some instances, they bribed college officials and secured their children’s admissions to elite schools through various fraud schemes. As corrupt and depraved as these recent revelations are, they are only the tip of the iceberg of generalized college corruption and gross dishonesty.

About 40 percent of college freshmen must take at least one remedial course. To deal with ill-prepared students, professors dumb down their courses so that students can get passing grades.

Colleges also set up majors with little or no academic content so as to accommodate students with limited academic abilities. Such majors often include the term “studies”: ethnic studies, cultural studies, gender studies, or American studies.

The major selected by the most ill-prepared students, sadly enough, is education. When students’ SAT scores are ranked by intended major, education majors place 26th on a list of 38.

One gross example of administrative dishonesty surfaced at the University of North Carolina. A learning specialist hired to help UNC athletes found that 60 percent of the 183 members of the football and basketball teams read between fourth- and eighth-grade levels. About 10 percent read below a third-grade level.

These athletes both graduated from high school and were admitted to UNC. More than likely, UNC is not alone in these practices because sports are the money-making center of many colleges.

It’s nearly impossible to listen to college presidents, provosts, and other administrators talk for more than 15 minutes or so before the words diversity and inclusion drop from their lips. But there’s a simple way to determine just how committed they are to their rhetoric.

Ask your average college president, provost, or administrator whether he bothers promoting political diversity among faculty. I’ll guarantee that if he is honest—or even answers the question—he will say he doesn’t believe in that kind of diversity and inclusion.

The fact is that when college presidents and their coterie talk about diversity and inclusion, they’re talking mostly about pleasing mixtures of race and sex. Years ago, their agenda was called affirmative action, racial preferences, or racial quotas.

These terms fell out of favor and usage as voters approved initiatives banning choosing by race, and courts found solely race-based admissions unconstitutional. People had to repackage their race-based agenda and call it diversity and inclusion.

Some were bold enough to argue that “diversity” produces educational benefits to all students, including white students. Nobody has bothered to scientifically establish just what those benefits are.

For example, does a racially diverse undergraduate student body lead to higher scores on graduate admissions tests such as the GRE, LSAT and MCAT?

By the way, Israel, Japan, and South Korea are among the world’s least racially diverse nations. In terms of academic achievement, their students run circles around diversity-crazed Americans.

I’m not sure about what can be done about education. But the first step toward any solution is for the American people to be aware of academic fraud that occurs at every level of education.