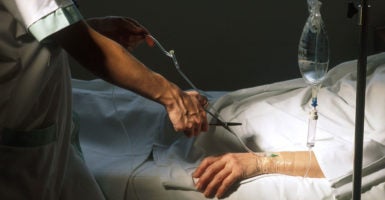 During the emotionally charged debate recently over physician-assisted suicide in Maryland, one legislator told the story of a former state senator who was comatose. He was given a mere 1 percent chance of survival, but today that senator has recovered and is alive and well.

Unlike alternative treatment options, there is no “do over” with physician-assisted suicide.

As lawmakers in several other states weigh physician-assisted suicide, the stakes could not be higher. While champions of assisted suicide often cite the futility of continuing treatment for patients believed to be terminally ill, medical prognoses are never completely certain.

By legalizing physician-assisted suicide, state lawmakers repudiate traditional medical ethics. The Hippocratic oath, which has governed Western medical ethics for over 2,000 years, says: “I will keep [the sick] from harm and injustice. I will neither give a deadly drug to anybody who asked for it, nor will I make a suggestion to this effect.”

If state lawmakers refuse to preserve this ancient pledge of medical morality, not only will they legalize medical killing, but they will also normalize the practice as socially acceptable. This endangers the most vulnerable members of society—the poor, the marginalized, and the mentally and physically disabled.

Some proponents of physician-assisted suicide insist it is a humane practice, claiming it allows patients an opportunity to end their lives with dignity and on their own terms.

Others justify assisted suicide as a “compassionate” option because they believe it prevents human suffering. Still others claim it saves families and taxpayers from the crushing burden of big medical bills.

For seniors, the rhetoric of cost control in government entitlements should be worrisome. The U.S. Census Bureau reports that over 20 percent of the United States will be age 65 and over in 2030, compared to just 13 percent in 2010.

Medicare recipients account for approximately 8 out of 10 American deaths; end-of-life care consumes about one-fourth of all Medicare spending.

Because dying relatives are eligible for hospice benefits under Medicare and Medicaid, most families no longer face the full range of medical costs for the terminally ill.

Still, given the mounting financial pressures on federal health care entitlements, it is easy to imagine future politicians embracing some sort of utilitarian “quality of life” ethic down the road:  that some lives are, and some are not, worth living. Such an ethic would become an existential threat to the frail elderly.

Echoing the position of the American College of Physicians and the American Society of Internal Medicine, medical professionals and senior policy specialists on a recent Heritage Foundation panel issued somber warnings and sketched a positive path forward for the care of the terminally ill.

Farr Curlin, a physician who is a professor at Duke University, noted that patients must no longer automatically expect physicians to operate by the traditional standards of the Hippocratic oath, because the oath is no longer the reigning standard in modern medical education.

G. Kevin Donovan, a medical practitioner from Georgetown University, told the Heritage audience that a major distinction exists between medical care at the end of life that is proportionate and disproportionate.

Disproportionate care, keeping patients alive by artificial means, is not ethically necessary or appropriate. At the same time, modern medicine has offered new avenues for palliative care options to protect patients from pain and suffering at the end of their lives.

“I can tell you that we now have measures to effectively treat pain, breathlessness, and other difficult symptoms more than we have ever had before,” he said. “And we can do that while respecting ethical guidelines that have guided the profession of medicine for centuries.”

Debates over physician-assisted suicide present all policymakers, regardless of partisan affiliation, with an opportunity to promote positive policies on end-of-life care. For example:

1. Publicize the option of advance directives for patients’ end-of-life care. Such directives, to be carried out by family members or trusted persons, can identify the patient’s wishes, particularly when the patient is no longer able to communicate those wishes. Federal officials can educate patients on the value of such directives through Medicare and Medicaid, but they should reflect the person’s ethical, moral, and religious convictions on life.

3. Expand patient choice in hospice care beyond traditional Medicare. Open it up to Medicare patients who wish to get such care in Medicare Advantage, the popular and successful program of competing private health plans.

As for general health policy, Heritage Foundation analysts long have argued that all patients should have the right to choose health plans and providers that respect their moral and religious convictions concerning medical care, particularly at the beginning and the end of life.