Americans Vote With Their Feet on High Taxes, Report Shows 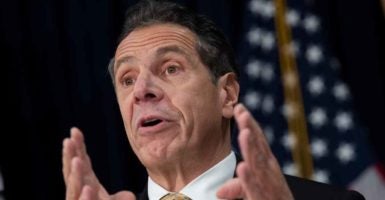 High-tax states such as New York get poor marks in a new report on states' economic performance and outlook. Pictured: New York Gov. Andrew Cuomo, a Democrat, speaks at a press conference Nov. 13, 2018, on whether Amazon would build a new headquarters in New York City. (Photo: Drew Angerer/Staff/Getty Images)

An index on the economic state of the states reveals a narrative that is being overlooked or ignored, says one of the report’s authors.

“This is the big story in America that nobody is talking about, which is that blue states are getting crushed by red states, and it’s a big source of embarrassment for the liberals because they don’t have a very good explanation for that,” Stephen Moore, a distinguished visiting fellow at The Heritage Foundation, said Monday.

Moore spoke as part of a panel hosted by The Heritage Foundation and focused on the report, “Rich States, Poor States: the ALEC-Laffer State Competitiveness Index.”

Moore is a co-author of the report’s 11th edition, which examines trends last year in states’ economic performance. The report ranks the economic outlook for each state based on 15 equally weighted policy variables such as tax rates, regulations, and labor policies.

The latest report ranks Utah at No. 1 in economic outlook for the 11th year in a row. New York landed at the bottom of the list at No. 50.

Residents in states such as New York and Connecticut, ranked at No. 40, are beginning to notice ballooning tax rates, Moore said. Every day in America, he said, 1,000 people flee states with high tax rates and migrate to states with lower tax rates.

Just because one state spends more taxpayer dollars doesn’t mean residents get more for their money, he said:

New York spends twice as much per capita as Utah does, and yet, by every objective measure, public services are better in Utah than they are in New York. It would be one thing if they were buying great schools and great roads, and they don’t. They have high crime and terrible schools.

Panelists contended that the rankings can have significant implications for a state’s future economic growth.

North Carolina, for example, jumped from a ranking in the mid-20s to the top 10 after its corporate tax rate was lowered to 2.5 percent, resulting in boosted economic prosperity, panelist Jonathan Williams said.

Williams, one of the authors of the report, is chief economist and vice president of the Center for State Fiscal Reform at the American Legislative Exchange Council, which publishes the index.

“When you compare [migration rates] against states like New York and some of the others that we’ve mentioned at the bottom of this list,” Williams said, “it’s no surprise business and people are voting with their feet, voting with their pocketbook, [and] going to states like North Carolina [as they] become more competitive and more profitable.”

The third author of the report is economist Arthur B. Laffer, a White House adviser.

Also on the panel was Adam Michel, a senior policy analyst specializing in taxes at Heritage’s Grover M. Hermann Center for the Federal Budget. Michel highlighted the capping of the state and local tax deduction, or SALT, at $10,000 as a pro-growth reform in the 2017 Tax Cuts and Jobs Act.

The reform continues to draw fire from politicians such as New York Gov. Andrew Cuomo, a Democrat, who said in a February tweet that the cap was a “gross injustice.”

“A couple of things stuck out to me,” Dick Patten, president of the American Business Defense Council, told The Daily Signal following the panel discussion. “One of them is the undeniable big picture of how taxes affect the growth of business, the growth of opportunity, the migration of people and their capital.”

Patten pointed to the estate tax, also known as the death tax, and similar tax policies that spur Americans to migrate to other states.

“One of the things that ‘Rich States, Poor States’ shows is it is undeniable—you know the benefit of low taxes,” Patten added.