The Facts About Gun Control and Homicide Rates 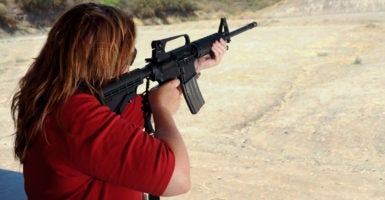 Are there really fewer homicides in countries with gun control? Are other countries besides the United States dealing with mass shooting? John Lott of the Crime Prevention Research Center joined The Daily Signal at the Conservative Political Action Conference to share the data about gun use the mainstream media isn’t highlighting. Read the transcript posted below or listen to the interview on the podcast. Plus: We cover how even Chelsea Clinton isn’t woke enough these days.

Kate Trinko: I’m Kate Trinko. We’re here with John Lott, who is with the Crime Prevention Research Center, and I understand there is a website where people can also check out your work?

Trinko: House Democrats just passed another gun control bill. John, what should we think about this?

Lott: These are bills related to background checks. Everybody wants to stop criminals from getting guns. The problem with these rules is that … they do stop law-abiding citizens at a much higher rate than they stop criminals.

And they make it harder, and more costly, for law-abiding citizens to go and get guns. Also, a number of Americans are going to find themselves unintentionally breaking the law and becoming criminals.

You know, it’s just lots of little things like that that just make it clear that their goal isn’t to have the background checks, their goal is to make it costly for law-abiding people to go and have guns for self-defense. And it’s basically rules that would make it so that the poor, particularly minorities, are going to find it difficult to have guns to defend themselves and their families.

Trinko: You’ve done a lot of research over the years about the connection, or lack thereof, between guns and crimes, and overall violence. What are some of the statistics that people should really know about?

Lott: Police are extremely important in stopping crime, but the police can’t be there all the time. The police themselves understand that they virtually always arrive on the crime scene after the crime has occurred. And that raises a real question, what should people do when they’re having to confront a criminal by themselves?

And what you find is that by far the safest course of action for people to take is to have a gun. Women, for example, who behave passively, are about 2.4 times more likely to end up being seriously injured than a woman who has a gun to protect herself.

It’s particularly two groups of people who benefit the most from having a gun. It’s the people who are most likely victims of violent crime, that overwhelmingly tends to be poor blacks who live in high-crime urban areas, and also people who are relatively weaker physically, and that tends to be women and the elderly.

Presence of a gun represents a much bigger relative change in a woman’s ability to go and protect herself than it does for a man.

Trinko: School shootings have been one of the biggest issues when we’re discussing gun control. In Baltimore recently they got rid of armed guards, and they brought them back after another shooting in a school. Other districts are considering, or have implemented, arming teachers. How do you think schools should deal with this?

Lott: Well, we have 20 states that have schools that allow teachers to carry guns right now. So, a lot of the kind of hypothetical discussions that people have about arming teachers, we really don’t need to guess, we have a lot of information to see how it works out.

Look, I understand the desire to have armed guards, but armed guards have a virtually impossible task in stopping a mass public shooting.

If you have somebody in uniform, or somebody who’s at least readily identifiable as an armed guard, and they’re the only person that’s armed, if you’re going to have an attack, they’re going to be the first person killed. Because the killers will know that once they kill that person, they’ll essentially have free rein to go and attack others that are there.

So, the advantage of having teachers with concealed handguns is that the attackers don’t know who it is that they have to worry about.

… If you are still going to have armed guards, it makes their job much safer, because if they go and attack an armed guard, they reveal their position, and then they have to worry about somebody behind them or to the side, somebody who they don’t know, whether they’re armed or not might be able to go and stop them at that point.

It really takes away the strategic advantages that these killers currently posses in places where you only have an armed guard, or you have nobody that’s armed.

Trinko: Yeah, and of course we would really love if some of these shootings could be stopped right away. It’s so awful.

We hear a lot from the media about, “Oh, these other countries have gun control and everything’s peaceful and lovely, and gun violence is off the charts in the U.S.” Is this depiction of the international situation accurate?

Lott: No, it’s not even remotely accurate. We’ve done research on mass public shootings across the country, across the world, looking at the data from 1998 through 2015. The United States makes about 4.6 percent of the world population, but we make up only about 1.1 percent of the mass public shooters over that period of time. So, we’re way, way below the average that’s there.

You know, you have many countries in Europe that have rates of death for mass public shooting that’s much higher than the United States. Russia is about 50 percent higher than we are. You have France, and Norway, and Finland, and Switzerland are major countries … that have much higher rates.

And of course, you have other countries, like Serbia and others in Europe, too, that also have much higher rates than in the United States.

Many of those countries … like France has extremely strict gun control laws, even semiautomatic guns are essentially banned in the country there.

So, it’s just the fact that there’s a problem with the data, that the data’s not complete there, that makes us look relatively higher than it would be otherwise. And there’s even developed countries that have high homicide rates that don’t report firearm homicides.

Trinko: We see this issue being discussed a lot. You’ve obviously been an advocate on this issue for a long time. What’s your advice to someone who’s not an expert in this area when they’re discussing it with friends and family who may disagree? Like, how do you think they should pursue it?

Lott: I think you need to educate yourself a little bit. Our website at CrimeResearch.org has a lot of information like I’m talking about here.

But I think there are a few simple types of questions you can ask people. If they believe that guns, on net, cause problems, ask them to point to one country in the world that’s banned guns, either all guns or all handguns, and seen the murder rates stay the same or go down. I can’t find a country, or a place, where that’s happened.

You know, Americans are familiar with what happened in Chicago and Washington, D.C., after we had handgun bans. Now they’ll go and they say, … “You [can’t] expect it to work, because unless you ban guns every place in a country, people can still get them from Indiana, or Illinois, or Maryland, or Virginia.” Thing is, that doesn’t explain why [the murder rate] went up. It may explain why it didn’t go down as much as they were predicting it was going to go down.

You can look at island nations that have banned guns, and what you find, whether it be Jamaica, or the Republic of Ireland, or the U.K., their homicide rates went up significantly, sometimes six, sevenfold increases, after they banned guns.

And there’s a simple reason why that’s the case. And that is, when you pass any gun control law, you have to ask yourself, “Who’s most likely to obey it?”

… If I go and ban guns, it’s going to basically be the most law-abiding, good people who are going to turn them in, not the criminals. I mean, you may take some guns away from the criminals, but if you primarily disarm law-abiding citizens, you’re actually going to make it relatively easier for criminals to go and commit crimes.

And people may point to Australia or something, Australia didn’t ban guns. Their firearm homicide and firearm suicide rates were falling for 15 years prior to the buyback that they had in ’96 and ’97, and it continued falling afterward, but actually at a much slower rate than it was falling beforehand. So, if anything, it looks like it actually was detrimental to the decline that they were having in those types of rates up until the buyback.

And in addition, they didn’t ban guns in Australia. What they did was they bought them back. But people, after the buyback, were allowed to go and buy guns again. And by 2010, the gun ownership rate in Australia was significantly above where it was prior to the buyback. So, it doesn’t fit any of their stories.

Trinko: Interesting. You certainly hear the left bring up Australia a lot. Well, John Lott, thank you so much for joining us today.

Lott: Thanks very much. If people want to find more they can go to our website at CrimeResearch.org.