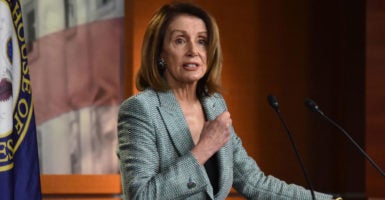 House Speaker Nancy Pelosi’s Washington, D.C., office was packed with protesters joined together Thursday for a “sit-in” against anti-Semitism in Congress.

“We have come today to your office to communicate our severe displeasure and wonderment over your refusal to specifically condemn the anti-Semitic remarks of Minnesota Congresswoman Ilhan Omar,” Rabia Kazan, president and founder of the Middle Eastern Women’s Coalition, said at the protest, quoting a letter she was reading out loud that was by Rabbi Aryeh Spero.

Pelosi, D-Calif., appointed Omar to the House Committee on Foreign Affairs. Since her appointment, Omar has made multiple statements questioning U.S. support for and ties to Israel.

Committee Chairman Eliot Engel, D-N.Y., was held up as an example in the alert for protest, organized by the National Conference of Jewish Affairs. Other groups backing the protest included the Coalition of Pro-Israel Advocates; Middle Eastern Women’s Coalition; and Zionist Organization of America, among others.

In their call for the sit-in, they highlighted Engel’s outspoken rebuke of Omar’s “vile anti-Semitic slur,” which has “no place” on the committee. Engel was referring to Omar’s most recent statement in which she categorized support for Israel as equal to “allegiance to a foreign country.”

“Speaker Pelosi, you had a chance to stop anti-Semitism dead in its tracks; you did not,” Kazan continued, still reading Rabbi Spero’s letter. “You had a chance to shut down the burgeoning anti-Jewish and anti-Israel attitudes seeping into America’s House of Representatives, but you didn’t.”

Rabbi Aryeh Spero, a leading theologian, spokesman, and thinker in the conservative movement, attended the protest and voiced his disappointment with Congress’ failure to pass a resolution targeting anti-Semitism specifically.

“They did not pass a stand-alone resolution against anti-Semitism that was in their own house,” Spero said. “Instead they passed this watered-down thing about hate in general, but that’s not where the source of the sin was. It was in anti-Semitism from a congresswoman and they watered it down as if it had nothing to do with Judaism.”

The “stand-alone resolution” Spero mentions was a four-page resolution sponsored by Rep. Ted Deutch, D-Fla., that called out anti-Semitism directly “as hateful expressions of intolerance that are contradictory to the values that define the people of the United States.”

Democrats deflected a vote on the proposal, and instead, “watered down” the resolution with language broadly condemning all forms of religious prejudice. The measure, which never named Omar, was passed by the House with a vote of 407-to-23. The 23 “nays” were all from Republican members.

“[Pelosi] couldn’t even get it the Democratic Party to back her up on a stand-alone condemnation of anti-Semitism,” Spero added. “The Black Caucus said ‘no’; I guess they want to have somehow a monopoly on racism.”

The sit-in was met with some detractors. CodePink, a women-led, anti-war grassroots organization that opposes “U.S. support for the Israeli occupation of Palestine and repressive regimes,” showed up to counter the protest with signs that said, “Standing with Muslims against Islamophobia and Racism” and “Stop Islamophobia.”

This article was corrected to reflect that Kazan was reading out loud the a letter by Rabbi Spero, not speaking in her own words. It has also been modified to clarify that Zionist Organization of America’s role with the event.