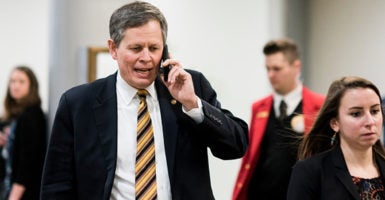 Republicans in the House and Senate are making another legislative push to enforce work requirements for able-bodied adults on welfare.

Sen. Steve Daines, R-Mont., and Republicans on the House Ways and Means Committee on Thursday announced the Jobs and Opportunity with Benefits and Services Act.

The JOBS Act comes as the Trump administration makes a renewed push for work requirements for welfare recipients in its fiscal year 2020 budget proposal.

The 1996 law created the federal Temporary Assistance for Needy Families program, passed by a Republican Congress and signed by a Democratic president, Bill Clinton, to tie work and job-training requirements to welfare payments.

Temporary Assistance for Needy Families is the largest welfare program in the country, and the Daines proposal would reauthorize and modernize it.

“Our welfare programs should be a springboard to work and self-sufficiency, not a sinkhole into government dependency,” Daines said in a statement. “My bill supports struggling low-income families and equips them with the skills and resources they need to find and keep a job—something that gives them hope, dignity, and a better future.”

Some Democrats and other critics have argued that work requirements can be onerous since welfare recipients are often more vulnerable populations.

In recent years, many states have begun to ignore the work requirements. The new legislation requires each state’s caseworkers to engage with job-seekers to help Temporary Assistance for Needy Families recipients find jobs and keep them.

The legislation also addresses matters such as mental health issues, as well as drug and alcohol addiction. It also seeks to close the “jobs gap” by connecting employers with potential workers.

“We know the history of government assistance programs. Rather than lift people out of poverty, they have created generational poverty and left millions of Americans perpetually dependent on government,” James said in a statement. “There are few things more debilitating than not being able to provide for oneself and one’s family.

“Assistance programs must help—not harm—the people they are intended to serve,” James said. “It’s time to ensure that people not only get the temporary assistance they need to get through the tough times, but that they also get help with the more permanent solution of finding meaningful work.”

The House version of the legislation is called the Jobs and Opportunity with Benefits and Services (JOBS) for Success Act.

According to House Republicans, less than half the total program dollars sent to states go toward supporting work requirements and job training. Instead, many states use the federal funds for Temporary Assistance for Needy Families to plug state budget gaps.

The bill would also limit the use of funds dedicated for welfare recipients to those with a monthly income below 200 percent of the poverty level and require states to spend a minimum level of funding on transportation and other work-support services to help more Americans prepare for jobs and keep them.

The federal government would also track states for how many in the caseload find work under the legislation.

The bill also renames Temporary Assistance to Needy Families as Jobs and Opportunity with Benefits and Services.

“Following the GOP tax cuts, our economy continues to soar, with wages rising at their fastest pace in a decade and near 50-year-low unemployment,” said Rep. Kevin Brady, R-Texas, ranking member of the House Ways and Means Committee and a co-sponsor of the House version.

“There are a record 7.3 million job openings, and millions of folks on the sidelines who we need—and want—to take part in this expanding economy,” Brady said in a statement. “This proposal builds on that by reforming our nation’s cash-for-work welfare program, refocusing this important program on the outcome of parents getting and keeping a job.”

Temporary Assistance for Needy Families replaced Aid to Families with Dependent Children after the 1996 law. Caseloads, poverty rates, and welfare spending decreased in the near term.

However, by 2000, the trend began to reverse, according to a report released last year by Robert Rector and Vijay Menon of The Heritage Foundation. State welfare bureaucracies lapsed back into check-writing agencies, they wrote, and more than half of Temporary Assistance for Needy Families recipients in the average state is not engaged in any work or job-training program.

President Donald Trump’s fiscal year 2020 budget proposal, released on Monday, would implement a requirement of at least 20 hours a week for work or job training for certain welfare benefits, such as food stamps and assistance with the cost of rents.

A job is the best solution to poverty, said Tim Chapman, executive director of Heritage Action for America, the lobbying arm of The Heritage Foundation.

“Americans in need deserve our best efforts in assisting them,” he said in a statement. “One of the best ways to ensure people receive the help they need is to aid them in finding a job.

“That’s what the JOBS for Success Act accomplishes. It helps provide a permanent solution for Americans struggling to make ends meet. The solution is a job,” Chapman said.