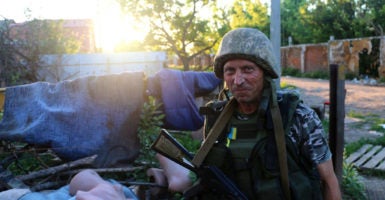 KYIV, Ukraine—The impending demise of a Cold War-era arms control treaty has sparked pledges from the leaders of both Ukraine and Russia to develop and field more intermediate-range missiles, highlighting a new flashpoint between the two erstwhile Soviet allies, which have been locked in a limited land war since April 2014.

“We are no longer bound by any limitations either on the range of our missiles or on their power,” Ukrainian President Petro Poroshenko said in a March 9 speech.

“We have additional opportunities in Ukraine due to the fact that the Russian Federation has de facto broken the Intermediate-Range Nuclear Forces Treaty, and the United States legally withdrew from it,” Poroshenko said.

At its inception, the INF Treaty was meant to reduce the risk of war between the U.S. and the Soviet Union—and it remained a cornerstone of European security after the Cold War. When the Soviet Union dissolved in 1991, the INF Treaty rolled over to apply to post-Soviet countries, including both Russia and Ukraine. For its part, the U.S. continued to respect the pact, too, even though it did not apply to other countries like China and Iran.

In February, however, the U.S. suspended its obligations under the INF Treaty, claiming that Russia had been developing and deploying missiles in violation of the pact’s limits for years. The U.S. said it will completely withdraw from the treaty within six months of the announced suspension unless Russia returns to compliance.

In turn, Moscow denied any violations and announced that Russia was likewise suspending its participation in the INF Treaty. Then, in a February address to Russian lawmakers, Russian President Vladimir Putin said Moscow had plans to develop a new generation of missiles and target them at the U.S. if Washington follows through on canceling the Cold War pact and deploys new missiles to Europe.

That news spurred officials in Kyiv to consider whether Ukraine should follow suit and ditch the INF Treaty to begin building a new arsenal of intermediate- and short-range missiles of its own—unbound by any payload or range limitations.

“Ukraine can’t be inside of the INF Treaty simply because the INF Treaty doesn’t exist anymore,” said Mykhailo Samus, deputy director of the Center for Army, Conversion, and Disarmament Studies, a Ukrainian think tank.

“So, no obligations for Ukraine now,” Samus said.

Ukraine has a legacy of rocket and missile technology from the Soviet era. Roughly 40 percent of the Soviet Union’s space program industry was located in the Ukrainian city of Dnipro during the Cold War. It’s where Soviet engineers designed and built rockets such as the Satan intercontinental ballistic missile, which was designed to strike the United States with nuclear weapons.

After the Soviet Union’s breakup—and despite the ongoing war in the Donbas—Ukraine never developed a missile capable of launching from Ukrainian soil to strike Moscow. With the INF Treaty’s demise, however, that looks likely to change.

“Our design bureaus and the industry are no longer bound by any restrictions regarding missile range,” Poroshenko said on March 11, according to Ukrainian news agencies, adding: “This means the issue of creating high-precision, extended-range missiles capable of hitting targets far behind enemy lines is on the agenda.”

Yet, some experts warn that Ukraine’s prospective missile development program, no matter how limited it might be, could spur Moscow to retaliate—and with potentially devastating consequences.

“Any attempt [by Ukraine] to develop [intermediate-range ballistic missiles] targeted on Russia immediately provides a justification for Russia to escalate the war with its own pre-emptive missile strikes across Ukraine. It is senseless and, frankly, suicidal,” Stephen Blank, senior fellow for Russia at the American Foreign Policy Council, told The Daily Signal.

After nearly five years of constant combat in Ukraine’s eastern Donbas region, Ukrainian forces remain engaged in a static, trench war against a combined force of pro-Russian separatists, foreign mercenaries, and Russian regulars. The war has, so far, killed more than 13,000 Ukrainians and displaced 1.7 million people.

Ukraine’s military budget is already stretched thin by the immediate needs of the war as well as a top-to-bottom military modernization program meant to overhaul Ukraine’s combined armed forces to defend against a Russian invasion.

Many experts downplay the likelihood that Ukraine could mount a serious challenge to Russia’s superiority in missile technology. For one, Russia’s military budget is more than 20 times greater than Ukraine’s. Thus, some say that Ukraine simply can’t afford to compete with Russia’s missile program.

Kyiv has pledged to spend $7.45 billion on defense and security in 2019. Of that number, $3.6 billion will go to the Ministry of Defense. As a point of comparison, Ukraine’s entire 2019 military budget is less than one-third the $13 billion price tag of the newest U.S. aircraft carrier, the USS Gerald R. Ford.

“I am skeptical that such a missile program would be developed by Ukraine soon,” said Alex Kokcharov, country risk analyst for Ukraine and Russia for the financial services company IHS Markit.

“Keeping robust defense capabilities, which are able to deal with hybrid warfare and with trench warfare in the Donbas, are much bigger priorities currently,” Kokcharov said. “I doubt that would change any time soon.”

However, Ukraine wouldn’t have to build its new missile systems from scratch.

After Russia launched military hostilities in 2014, Ukraine began developing new short- and intermediate-range missile systems—all of which complied with the INF Treaty’s limits. Notably, the Neptune cruise missile and the Grom-2 ballistic missile, both of which have reported maximum ranges of about 300 km (186 miles).

Ukrainian experts say that with some relatively inexpensive modifications, these existing missile systems could have ranges within the INF Treaty’s prescribed range window of 300 to 3,400 miles. In that case, Ukraine would have the capacity to strike Moscow with domestically launched missiles.

“I think it’s possible that the Neptune missile will reach Moscow after modifications, because there won’t be any limitations,” Samus said. “It will be natural for Ukraine to make these modifications.”

Under the 1992 Budapest Memorandum, Ukraine voluntarily gave up its Soviet-era nuclear arsenal, as well as most of its missiles, in exchange for security assurances from the U.S., Russia, and the United Kingdom.

Many in Ukraine now see the Budapest Memorandum as a blunder, leaving their country without the means to deter Russia from conventional and hybrid military aggression. Therefore, in the eyes of some Ukrainian leaders, building new missiles could be a means to regain some of their country’s lost military clout.

“We need high-precision missiles and we are not going to repeat the mistakes of the Budapest Memorandum,” Poroshenko said.

The conflict in eastern Ukraine is moderated in intensity and geographically quarantined according to the rules of a February 2015 cease-fire deal, known as Minsk II. Still, the daily fighting constantly threatens to spark a much bigger, more devastating conflict.

For example, a November 2018 Black Sea naval confrontation, in which Russian military units attacked and captured three Ukrainian navy vessels, nearly ignited a bigger war. In the weeks that followed, Ukraine declared martial law and fortified its southern seaboard against the threat of a Russian amphibious invasion.

Since 2014, the war has upheaved the post-Cold War military balance of power in Eastern Europe. Ukraine, for its part, went from fielding just 6,000 combat-ready troops in early 2014 to a force that now comprises 250,000 active-duty military personnel and 80,000 reservists.

In terms of manpower, Ukraine has the second-largest military force in Europe. Only Russia’s is bigger.

The war in Ukraine has also spurred countries across the region to rapidly militarize to defend themselves against the Russian threat. And with the U.S. and Russia now on their way out of the INF Treaty, and with Ukraine apparently ready to follow suit, an already dicey regional security balance is under even more pressure.

Amid that backdrop, some voices have criticized the U.S. withdrawal from the INF Treaty, warning that the move could provide the catalyst for a destabilizing regional arms race.

Mark Hertling, former commanding general of U.S. Army Europe and the Seventh Army, said the U.S. move “may portend additional action on the part of Ukraine, but it could also contribute to other nations getting into the fray as well.”

“It appears that without restraint from the U.S., and our continued adherence to the protocols of the INF, there will be various governments that will begin doing things like this, that will continue to cause the deterioration of the relative peace and stability that has been in Europe for the past 70 years,” Hertling said.

Yet, other experts say it was high time for the U.S. to withdraw from Cold War-era pact, especially since Russia had been violating its terms for years.

“Continued efforts by the U.S. government over the last five years to engage Russia to persuade them to return to compliance with the INF Treaty have failed.  All U.S. inquiries and efforts have been met with lies, deceit, and denial,” Thomas Spoehr, director of The Heritage Foundation’s Center for National Defense, told The Daily Signal in an earlier interview.

For their part, top Ukrainian officials say that if Russia is set to expand its missile arsenal, then Ukraine must reciprocate out of military necessity.

“We must use everything to protect ourselves,” Ukrainian Minister of Foreign Affairs Pavlo Klimkin said in February. “We already have certain potential in the field of missile weapons, and it is we who will decide which missiles we need for the future.”