Government Lays Out $4.6 Million on Lobster and Crab in Spending Spike 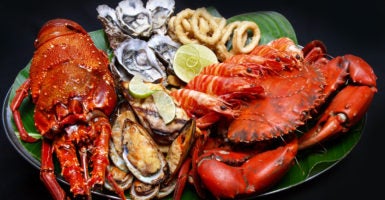 A $4.6 million bill for lobster tail and crab is only the tip of the iceberg in the federal government's spending spree at the end of fiscal year 2018, a new report finds. (Photo: Vivid International/EyeEm/Getty Images)

Against the backdrop of a record-breaking $22 trillion in national debt, the revelation that the federal government spent $4.6 million on lobster tail and crab is only one line item in a report that may disturb cash-strapped taxpayers.

OpenTheBooks.com, a government watchdog nonprofit working to put all government spending online, has published “The Federal Government’s Use-It-or-Lose-It Spending Spree,” showing that through fiscal year 2018, federal agencies spent $544.1 billion on contracts, 10 percent of it in the final week ending Sept. 30.

“The spike in use-it-or-lose-it spending at the end of 2018 reiterates the fact that the Bipartisan Budget Act of 2018 was another irresponsible budget deal,” Justin Bogie, senior policy analyst in fiscal affairs at The Heritage Foundation, said in an email to The Daily Signal.

According to a Heritage Foundation report, that spending bill shattered the limits put in place by the Budget Control Act of 2011, approved additional disaster relief for areas hit by hurricanes and wildfires, and extended many special-interest tax provisions.

The federal government’s spending spike of $97 billion on 509,828 contracts in the final month of the fiscal year, Bogie said, is because of the time restraints legislators put on agencies to spend.

“Appropriations were not finalized until nearly six months into the fiscal year, allowing agencies little time to spend a whopping $143 billion in additional funding, and leaving billions of dollars to be wasted away on unnecessary purchases,” Bogie said.

In addition to incentivizing reckless spending, the Bipartisan Budget Act also is estimated to “increase the federal deficit by $342 billion over 10 years, not including increased interest payments on the national debt,” according to The Heritage Foundation report.

“Congress should work to end the use-it-or-lose-it budgeting approach and return unused funding to the Treasury to pay down the $22 trillion national debt,” Bogie said. “Taxpayers can’t afford any more wasteful spending.”