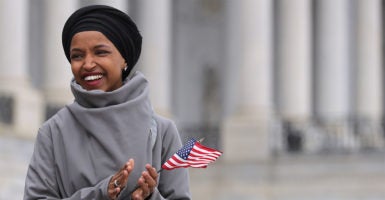 Rep. Ilhan Omar, D-Minn., apologizes for her 2012 tweet saying, "Israel has hypnotized the world, may Allah awaken the people and help them see the evil doings of Israel," but that didn't happen until she made it to Congress. Pictured: Omar rallies with fellow Democrats before voting on H.R. 1, or the For the People Act, on the East Steps of the U.S. Capitol March 8. (Photo: Chip Somodevilla/Getty Images)

Rep. Ilhan Omar’s, D-Minn., comment that the influence of the Israeli lobby in Washington pushes lawmakers to take a pledge of “allegiance to a foreign country” was bad enough. A watered-down House resolution condemning, not Omar, but “all hatred” was as tepid as denouncing drunk driving.

After heated debate within their caucus, Speaker Nancy Pelosi and the Democratic leadership released a separate statement:

Congresswoman Omar’s use of anti-Semitic tropes and prejudicial accusations about Israel’s supporters is deeply offensive. We condemn these remarks and we call upon Congresswoman Omar to immediately apologize for these hurtful comments.

Omar complied, but this is not the first time she’s had to walk back controversial comments about Israel.

In 2012, Omar tweeted: “Israel has hypnotized the world, may Allah awaken the people and help them see the evil doings of Israel.”

The implication was that Israel and its backers are being manipulated to support the Jewish state. This old anti-Semitic trope will be familiar to anyone with a minimal understanding of the history of the Jewish people and the genocidal goal of their enemies.

Yes, Omar apologized, but not until she got to Congress. This assumes her apology was more political than sincere. Consider her appeal to “Allah.” Why would she, or any Muslim, disobey Allah?

Sarah Stern, who heads Endowment for Middle East Truth, which bills itself as “a Washington, D.C.,-based think tank and policy center with an unabashedly pro-America and pro-Israel stance,” emailed to say:

We Jews have learned from our long and painful history that words matter. Violence against Jews does not erupt in a vacuum; and the increasing ease with which anti-Semitic comments are uttered within certain segments of our society is deeply painful and disturbing.

That truth can also be seen in Israel where Palestinian Arafat Irfaiya, the prime suspect in the murder of Israeli teenager Ori Ansbacher, was indicted last week. World Israel News reports his explanation for stabbing and then raping the girl: “Because she was a Jew.” The publication says Irfaiya left his home in Hebron with “the express intention of killing a Jew.”

You have to be taught to hate, as Oscar Hammerstein wrote in the musical “South Pacific,” and hatred is at the heart of anti-Semitism, most notably in radical Islam.

It can only get worse if those who harbor anti-Semitic sentiments—like Omar and her colleague and fellow Muslim, Rep. Rashida Tlaib, D-Mich.,—are elected to Congress.

According to The Daily Caller, Maher Abdel-qader, a key fundraiser for Tlaib, shared an anti-Semitic video that described Jews as “satanic.” The clip included this comment: “Research the truth about the Holocaust, and you’ll definitely start to question what you thought you knew.”

The video’s narrator went on to question whether 6 million Jews died in the Holocaust. The Caller writes, “Abdel-qader shared the video both on his personal Facebook page and within the group that now includes Tlaib.”

Morton A. Klein, president of the Zionist Organization of America, the oldest pro-Israel group in the U.S., told Mark Levin on Levin’s radio show:

… the Democrat party has shown a lack of will to tell the truth of the Arab-Islamist war against Israel. In a recent BDS vote to stop BDS, boycotting Israel, the innocent Israel, half of the Democrats voted against that bill. Virtually every Republican voted for it. … So we have a real problem with the Democratic party.

If Pelosi can’t muster a powerful and unequivocal resolution condemning anti-Semitism, then Omar will have secured her political future and won a critical battle for the soul of the Democratic Party. At that point, the days when American Jews can live comfortably within the Democratic fold will be numbered.

I wish, but the history of Jewish loyalty to the Democrats is long, which is a mystery since in the end we are again talking about their survival, not just as a Middle East nation, but as a people.