Trump’s Budget Would Chip Away at the Debt, but More Work Still Needed 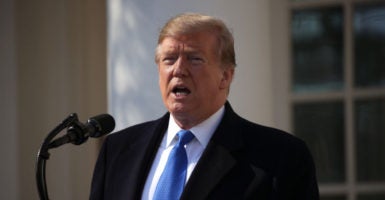 Budget season is officially upon us.

On Monday, President Donald Trump released a preliminary sketch of his fiscal year 2020 budget proposal. The outline reflects a good first step toward restoring fiscal sustainability. It would cut spending by trillions of dollars and rejects the notion that another massive budget cap-lifting deal is essential to provide for national defense.

Yet much more is needed if the U.S. is going to stave off a future budget meltdown. Trump’s proposal would fail to reach balance in 10 years and would do little to address unsustainable entitlement programs, which are driving much of the budget’s projected long-term spending growth.

The bottom line is that absent economically destructive tax increases, without fundamentally reforming Social Security, Medicare, and Medicaid, it will be impossible to achieve a sustainable budget over the long term.

The document released Monday is just a preview of what’s in the president’s full budget proposal, which will be released March 18. Here’s what we know so far.

Like the fiscal year 2019 budget, this budget proposal would not balance within the 10-year budget window. Yet the administration projects that it would reach surplus by 2034. In total, it would cut spending by $2.7 trillion over the next decade.

Of the $2.7 trillion in spending cuts, $2.1 trillion of the savings would come from cuts to mandatory programs. But concerningly, only 24 percent of these cuts would be implemented during the first five years of the budget window.

Taxpayers would be better served if reforms took place immediately, not years down the road.

Under the president’s budget, deficit and debt levels would start to decline. After reaching a deficit of $1.1 trillion in 2021, the deficit would decline to $202 billion by 2029. The administration projects that debt held by the public will rise by $7.5 trillion over the next decade, but will decrease as a share of the economy from 79.5 percent to 71.3 percent.

Perhaps the most interesting part of the president’s fiscal year 2020 budget is how it could shape the debate over the future of the Budget Control Act spending caps. The caps are set to run through 2021, yet some lawmakers are already pushing for another two-year deal to increase the limits.

The president’s treatment of the budget caps this year stands in contrast to his previous two budgets. Both the 2018 and 2019 budget proposals would have eliminated the firewall between defense and nondefense spending, creating one overall cap on discretionary spending. This allowed the administration to prioritize defense spending without breaking the total spending limit.

In both the president’s previous budgets, every dollar increase in defense spending was equally paid for by a cut to nondefense programs.

The fiscal year 2020 budget takes a different approach. The president’s proposal would maintain both the defense and nondefense caps put in place by the Budget Control Act. That means that in 2020, base defense funding would be $71 billion below fiscal year 2019 levels.

Under the Budget Control Act, nondefense spending is currently set to fall from $597 billion to $543 billion in 2020. The president’s budget calls for a nondefense cut of 4.6 percent, which would save $27 billion compared to current law. Yet the administration assumes the enactment of a rescissions package and budgetary gimmick savings through Changes in Mandatory Programs to further reduce nondefense spending to the Budget Control Act level.

The president should be commended for wanting to properly fund the military while staying within the budget caps, but the way this budget does it is not ideal.

The president should follow his previous two proposals and propose eliminating the firewall between defense and nondefense spending. This would force Congress to focus on its constitutional obligations, like ensuring a strong national defense, without breaking the budget caps.

It is possible to fully fund the military while reducing spending and cutting taxes. The Heritage Foundation’s “Blueprint for Balance” illustrates a path to do just that. There is no reason to use overseas contingency operations funding as a gimmick to evade the spending caps any more than there is a need for another deficit-increasing budget deal.

Budget observers are anxiously awaiting next week’s full release of the president’s budget. As is so often the case, the devil is in the details, and more information will be needed to fully understand the implications of this proposal.

But one thing is already clear: While the president’s budget would make progress on controlling spending and reducing the national debt, there is much work yet to be done.

It’s now up to the president and Congress to work together and find a responsible path forward that cuts spending, reduces the national debt, and ensures economic prosperity and opportunity for all Americans.