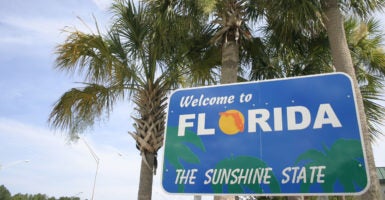 Florida lawmakers are considering a criminal justice bill that mirrors many of the reforms in the federal First Step Act. (Photo: photohoo/Getty Images)

Jacob Paolillo is a member of the Young Leaders Program at The Heritage Foundation.

Criminal justice reform in Florida is poised to follow in the footsteps of federal legislation signed into law by President Donald Trump in December.

It’s an issue that has gained substantial traction at both the state and federal level.

The Florida First Step Act, drafted by Florida state Sen. Jeff Brandes, was passed unanimously by the Criminal Justice Committee of the Florida Legislature on March 4, and is now pending consideration by two other committees.

Brandes, a Pinellas County Republican, has been a leader on criminal justice reform, introducing nine other bills this year focused on improving the system. But the Florida First Step Act is the most comprehensive.

Modeled after the federal First Step Act, which Congress passed in late December with strong bipartisan support, the Florida bill includes only the “best ideas” from its federal counterpart, he says.

Among those reforms, the bill would give judges more discretion over the sentencing of certain nonviolent drug offenders, in lieu of mandatory minimum sentences.

Additionally, the bill provides reductions of up to 60 days in the sentences of inmates who complete a Prison Entrepreneurship Program, or receive a GED or certain vocational certifications.

The bill would also create a “release orientation program” that links prisoners to community resources upon release.

If enacted, the bill would significantly reform Florida’s criminal justice system in other ways as well.

Currently, Florida prisons house roughly 100,000 prisoners, about 85,000 of whom are due to re-enter society within the next five years. Of those in prison, 52.6 percent have no prior prison sentences, and 16 percent are imprisoned for drug-related offenses.

The bill’s major provision, to eliminate mandatory minimums for first-time, nonviolent drug offenders, would reduce those numbers, as evidenced by past reforms.

Florida has repealed mandatory minimums for drug offenses before and successfully reduced prison admissions even as crime rates fell. It then reversed course in the late 1990s, however, accounting for the large growth in the prison population seen today.

But now, Florida is again considering mandatory minimum sentencing repeals on the heels of other states, such as Michigan and New York, which have enacted similar sentencing reforms and have experienced improvements to their communities and criminal justice systems.

That isn’t to say that incarceration is bad, per se—in fact, far from it. Incarceration serves a necessary function to protect public safety. But to the extent that low-level drug dealers are locked up for excessively long periods of time because of lengthy mandatory minimums, there’s room for reform.

Indeed, releasing nonviolent offenders back into society is not a goal unto itself. Instead, the goal is to reduce recidivism rates and give inmates opportunities to improve their lives—which is exactly what the Florida First Step Act aims to accomplish.

By shortening sentences for prisoners who receive educational training during their incarceration, the bill incentivizes inmates to learn valuable skills before re-entering society that they can use to get jobs and become productive, law-abiding members of society.

Those enrolled in the bill’s Prison Entrepreneurship Program also will have the opportunity to receive “at least 90 days of transitional and post-release continuing educational services” through partnerships with colleges, universities, or nonprofits.

Providing formerly incarcerated individuals with greater economic opportunities through education could greatly improve their chances of successfully reintegrating back into their communities.

As Heritage Foundation scholars have discussed, red states such as Texas and Georgia have reduced crime and recidivism rates through reforms that improved prison conditions and provided educational opportunities to inmates.

The Florida bill would also help to keep families together by mandating that—subject to certain practical limitations—inmates be located in correctional facilities that are within 150 miles of their family home.

Giving families more opportunity to visit and maintain their relationships with incarcerated loved ones can have a powerful effect on both the inmates and their families.

In fact, one study from Minnesota found re-conviction rates were “13 percent lower for visited inmates than for those who were not visited.”

This is likely because social support strengthens prisoners’ emotional and social connection to society, making them more likely to reintegrate into the community upon release and motivating them to reform.

Another study showed, unsurprisingly, that prisoners receive more visits when they are closer to their primary homes. The researchers estimated that nearly half of prisoners located within 50 miles of their homes received a monthly visit, compared to only 14.5 percent of those housed between 501 and 1,000 miles from their homes.

In 2015, of the 99,485 Florida inmates with children, only a small percentage of them were incarcerated in the county where their children lived or in a county adjacent to it.

Children of incarcerated parents are much more likely to commit crimes, develop psychological issues, and have low levels of education. But when children have a positive relationship with their parent prior to incarceration, visitation can reduce these tendencies.

Finally, the Florida bill would allow low-risk offenders to be transferred to administrative probation, where they would still be monitored, but on a less-stringent basis.

Brandes said this new probation system would further drive down administrative fees and, consequently, the costs to Florida taxpayers.

Some Democrats, however, are concerned that the bill doesn’t do enough to address racial disparities and doesn’t invest in mental health or substance abuse treatment.

They also fear that one of the bill’s provisions—to provide inmates with a list of outstanding court fees and restitution upon release—will abridge convicted felons’ right to vote once they are free citizens, a right that was restored to convicted felons by a Florida ballot initiative in November.

But Brandes has said that he’s open to changes, intending this bill to be an initial step in reforming the system.

While not a complete solution, the Florida First Step Act, like its federal counterpart, would take sensible and proven steps to keep families together, reduce recidivism rates, and save taxpayer dollars.

Above all, the bill should transcend partisan politics. If it is enacted, the Florida First Step Act would be a major win for Florida’s communities and its criminal justice system.