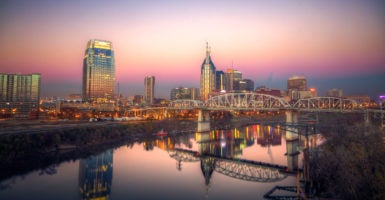 AllianceBernstein, another firm fleeing the Empire State’s stifling economy, just announced that it’s relocating its $70 million headquarters to Nashville. But before it moves, the CEO is warning Tennessee: It’s not a fan of religious liberty. (Photo: Malcolm MacGregor/Getty Images)

Amazon isn’t the only one fed up with New York’s ridiculous tax rates. Plenty of companies are packing their bags and looking for office space in states with more business-friendly policies. There’s just one problem: A lot of these top firms can’t stand the conservative laws that make their new homes so successful.

AllianceBernstein, another firm fleeing the Empire State’s stifling economy, just announced that it’s relocating its $70 million headquarters to Nashville. But before it moves, the CEO is warning Tennessee: It’s not a fan of religious liberty. And AllianceBernstein is proving it by fighting the state’s faith-based adoption bill.

“AB chose to move to Tennessee because we believe it is a welcoming state that is focused on growing jobs, incomes, and the tax base,” Chief Operating Officer Jim Gingrich said in a statement. But, “the bills being debated in the current session of the legislature send a clear message to certain constituencies that they are not welcome. Other states have tried to pass similar bills,” he claims, “and this has proven to be anti-growth, anti-job, and against the interests of the citizens of those states.”

Is that so? Because the last time financial experts checked, the most socially conservative states also happened to be the most prosperous. For years, places like North Carolina (No. 1), Texas (No. 3), and Georgia (No. 6) have topped Forbes’s Best States for Business list—despite high-profile campaigns for privacy, religious liberty, and life.

What these liberal CEOs don’t understand is that these favorable business climates only come from conservative legislators who understand that real freedom leads to economic growth. That’s why these red states are so enticing to companies, because their social values haven’t just built a foundation for workforce and family success—but thriving corporations, too.

The left loves to throw around this stale talking point that fighting for conservative values hurts states. Hardly! In the aftermath of the fiercest bathroom fight ever in North Carolina, nothing the liberals predicted came to pass. Even after a string of canceled concerts and celebrity boycotts, the Tar Heels are thriving. More than two years after the law, more businesses are moving to North Carolina than away from it.

“The outlook is also strong. Job growth and gross state product growth are expected to rank among the strongest in the country over the next five years,” Forbes points out. As for all of those people moving out of the state because it dared to protect women and children? “The population is growing twice as fast as the U.S. average … “

Why? Because in states where the social structure is better, you don’t need as much government interference. There’s less regulation, more freedom, and lower taxes in places like Tennessee (No. 13). But companies like AllianceBernstein can’t have it both ways.

Too many of these corporate refugees are relocating and trying to impose their extreme politics on their new homes. If conservative states want to keep their economies competitive, they need to make it clear. Businesses can either embrace the social structure that leads to growth and opportunity, or they can do what most Americans would prefer—and stay out of politics all together.

If CEOs don’t like those options, tell them to go back to the high-regulation, high-tax states from which they come.