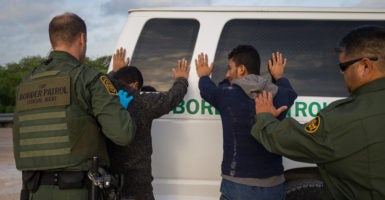 Arrests of illegal immigrants surge at the border as President Donald Trump makes the case for his declaration of a national emergency. (Photo: Loren Elliott/Getty Images)

The U.S. border with Mexico is at a “breaking point,” Trump administration officials say, with arrests of illegal immigrants surging to record levels.

In February, border agents arrested more than 66,400 people for entering the country illegally, the highest number recorded since 2008.

“This situation is not sustainable,” Customs and Border Protection Commissioner Kevin McAleenan said in a press conference Monday. “The system is well beyond capacity and remains at the breaking point.”

“This is a crisis — pure and simple — and we need to respond accordingly,” Nielsen said in her prepared statement. “We cannot stand idly by as our border security is further compromised and our immigration laws are exploited.”

The latest numbers come as President Donald Trump makes his case for his declaration of a national emergency to secure funding to build and add to barriers along the southern border.

McAleenan said the increased flow of illegal immigrants presents “both a border security and a humanitarian crisis.”

Since 2014, the number of families arriving illegally has increased dramatically. This poses a difficult challenge for Border Patrol officials, who have been clear they don’t have the infrastructure to respond to the influx of families—specifically children.

According to statistics released by U.S. Customs and Border Protection, 26,973 unaccompanied children have arrived at the border since Oct. 1, when fiscal year 2019 began. This is a 54 percent jump from the same period last year.

The number of family units apprehended increased by 338 percent, with 136,150 families apprehended since Oct. 1, compared to 31,100 over the same period the previous year.

The measure now moves to the Republican-controlled Senate, where the president faces an uphill battle.

At least four Republican senators—Rand Paul of Kentucky, Lisa Murkowski of Alaska, Susan Collins of Maine and Thom Tillis of North Carolina—have vowed to vote with Democrats to block the president’s emergency declaration.

The U.S. border with Mexico stretches for more than 2,000 miles. Securing it, experts say, is only a start to addressing the crisis.

“The huge upsurge in illegal border crossings shows that we really do have a crisis and a national emergency at the border,” Hans von Spakovsky, a senior legal fellow at The Heritage Foundation, told The Daily Signal in an email, adding:

There is no doubt that illegal aliens are attracted by what they’ve seen and heard about the sanctuary policies being implemented by states and cities to obstruct immigration enforcement; the ability to abuse asylum policies; and the misinterpretation of federal law by the courts that allows families with children free rein to be caught and then released into the interior of the country, where they can disappear and face no consequences for their illegal actions.