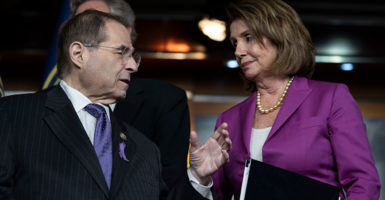 The House Judiciary Committee, under its new Democratic leadership, on Monday issued 81 document requests as part of a multifaceted investigation into President Donald Trump.

The requests went to some familiar individuals and entities as the Democratic majority laid out a game plan for seeking to build a case of obstruction of justice, public corruption, and abuse of power by the president.

“We must protect and respect the work of special counsel Mueller, but we cannot rely on others to do the investigative work for us,” Nadler said in a statement.

Mueller is investigating Russian meddling in the 2016 presidential campaign, and whether the Trump campaign colluded in it. The Southern District of New York has investigated an alleged campaign finance violation.

“We have sent these document requests in order to begin building the public record,” Nadler added. “The special counsel’s office and the Southern District of New York are aware that we are taking these steps. We will act quickly to gather this information, assess the evidence, and follow the facts where they lead with full transparency with the American people.”

Even as some House Democrats have clamored for the president’s impeachment, House Speaker Nancy Pelosi, D-Calif., and other Democratic leaders suggested it’s best to wait for the federal prosecutors to complete their work.

Monday’s moves are a sign that the committee that would initiate impeachment proceedings isn’t waiting on federal prosecutors to complete their work. Nadler, however, said nothing about impeachment in his announcement.

Among those who received document requests were American Media Inc. and its publisher David Pecker, who was allegedly involved in trying to cover up a story about an extramarital affair by Trump before he was president.

Nadler’s committee also sent document requests to some of the president’s family members—sons Donald Trump Jr. and Eric Trump, as well as his son-in-law, Jared Kushner. The committee also seeks documents from the Trump Organization and the Trump Foundation.

The president was dismissive of the investigation.

“I cooperate all the time with everybody … . You know the beautiful thing—no collusion. It’s all a hoax,” Trump told reporters during a White House event on Monday hosting the North Dakota State Bison, seven-time winners of the NCAA’s Football Championship Subdivision.

When some of the football players laughed, Trump added, “You’re going to learn about that as you grow older. It’s a political hoax. There’s no collusion.”

On “obstruction of justice,” the committee will explore whether Trump or others interfered in criminal investigations.

The “public corruption” focus will look at whether any of Trump’s business dealings have run afoul of the emoluments clause of the Constitution.

On “abuses of power,” the committee will look into Trump’s criticism of the media, judges, and federal law enforcement. The committee also plans to look into what it calls “misuse of the pardon power.”