In Their Own Words: Moms of 5 Kids Who Think They’re Transgender Speak Out 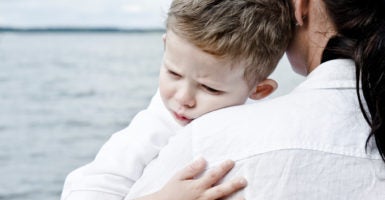 "Why are doctors—who took an oath to 'first, do no harm'—allowed to sterilize and surgically mutilate mentally ill, delusional children?" asks one parent. (Photo: Chris Hendrickson/Getty Images)

This article originally appeared in Public Discourse. Because it is published by anonymous parents, the editor’s name is listed as author.

When a child says he is transgender, we are expected nowadays to accept and celebrate this announcement.

But there are many parents who are not celebrating. They are suffering in silence.

They know their children were not born in the wrong bodies and that hormones and surgeries are not the answers to their discomfort and confusion.

Their stories are heartbreaking. Here they are, in their own words.

I was shocked when my 13-year-old daughter told me she was really my transgender son. She had no masculine interests and hated all sports. But as a smart, quirky teen on the autism spectrum, she had a long history of not fitting in with girls.

Where did she get the idea she was transgender? From a school presentation—at a school where more than 5 percent of the student body called themselves trans or nonbinary, and where several students were already on hormones, and one had a mastectomy at the age of 16.

In my daughter’s world—in real life and online—transgender identities are common, and hormones and surgeries are no big deal.

I took her to a gender clinician seeking expert guidance. Instead, he accepted her new identity and told me I must refer to my daughter with masculine pronouns, call her by a masculine name, and buy her a binder to flatten her breasts.

He recommended no therapy, and there was no consideration of the social factors that obviously affected her thinking. I was directed to put her on puberty-blocking drugs.

I was falsely assured that these drugs were well-studied, and that they were a perfectly safe way for her to “explore gender.” I was told that if I did not comply, she would be at higher risk of suicide.

I have nowhere to go for proper help. Therapists are actively trained and socially pressured not to question these increasingly common identities.

In Washington, D.C., and many states with so-called conversion therapy bans, questioning a child’s belief that she is of the opposite sex is against the law.

I have been living this nightmare for more than four years. And despite my best efforts, my daughter plans to medically transition when she turns 18 later this year.

Parents like me must remain anonymous to maintain our children’s privacy, and because we face legal repercussions if our names are revealed.

Parents who do not support their child’s gender identity risk being reported to Child Protective Services and losing custody of their children. In New Jersey, the Department of Education officially encourages schools to report such parents.

Meanwhile, the media glamorize and celebrate trans-identified children while ignoring stories like mine. I have written to well over 100 journalists, begging them to write about what is happening to kids.

I also wrote to my representative and senators, but have been ignored by their staff. My online posts about my daughter’s story have been deleted, and I have been permanently banned in an online forum.

As a lifelong Democrat, I am outraged by my former party and find it ironic that only conservative news outlets have reported my story without bias or censorship.

We parents are ignored and vilified, while our children are suffering in the name of inclusivity and acceptance.

I hope that some open-minded Democratic lawmakers will wake up to the fact that they are complicit in harming vulnerable kids. I hope that they ask themselves this question: Why are physicians medicalizing children in the name of an unproven, malleable gender identity? And why are lawmakers enshrining “gender identity” into state and federal laws?

My daughter, at age 14, spontaneously decided that she is actually a male.

After suffering multiple traumatic events in her life and spending a large amount of time on the internet, she announced that she was “trans.” Her personality changed almost overnight, and she went from being a sweet, loving girl to a foul-mouthed, hateful “pansexual male.”

At first, I thought she was just going through a phase. But the more I tried to reason with her, the more she dug her heels in.

Around this time, she was diagnosed with ADHD, depression, and anxiety. But mental health professionals seemed mainly interested in helping her process her new identity as a male and persuading me to accept the notion that my daughter is actually my son.

At age 16, my daughter ran away and reported to the Department of Child Services that she felt unsafe living with me because I refused to refer to her using male pronouns or her chosen male name.

Although the department investigated and found she was well cared for, it forced me to meet with a trans-identified person to “educate” me on these issues.

Soon after, without my knowledge, a pediatric endocrinologist taught my daughter—a minor—to inject herself with testosterone. My daughter then ran away to Oregon, where state law allowed her—at the age of 17, without my knowledge or consent—to change her name and legal gender in court, and to undergo a double mastectomy and a radical hysterectomy.

My once beautiful daughter is now 19 years old, homeless, bearded, in extreme poverty, sterilized, not receiving mental health services, extremely mentally ill, and planning a radial forearm phalloplasty (a surgical procedure that removes part of her arm to construct a fake penis).

The level of heartbreak and rage I am experiencing, as a mother, is indescribable.

Why does Oregon law allow children to make life-altering medical decisions? As a society, we are rightly outraged about “female circumcision.” Why are doctors—who took an oath to “first, do no harm”—allowed to sterilize and surgically mutilate mentally ill, delusional children?

In August 2017, our seventh-grade daughter came home from sleep-away camp believing she was a boy. She had a new vocabulary and a strong desire to change her name and pronouns.

We never anticipated that we needed to ask the camp if she was going to be in a cabin with girls who were socially transitioning to live as boys.

We suspect that our daughter assumed that since my wife and I are lesbians, and liberal in our politics, we would support this new identity.

We may be lesbians, but we are not confused about biology. She tried to persuade us with a very scripted explanation that she had always “felt” like a boy. But we had never once seen or heard from her any evidence of this “feeling.”

We listened to her, gave her the space to talk about her feelings, and tried hard not to convey to her that we were utterly horrified by this revelation.

As we began to try to find information to make sense of this, we found evidence of a social contagion all over the internet. YouTube, Instagram, Twitter, and Reddit supplied a how-to guide and handbook on transitioning, complete with trans stars like Jazz Jennings and Riley J. Dennis, many with thousands of followers.

We are in no way out of the woods. Some parents dealing with this issue view us as lucky because she is so young, giving us and her more time to work through her discomfort.

Maybe we will be, but we are facing this ever-growing storm of a social contagion without any help from the mainstream media or the negligent Food and Drug Administration, not to mention the pathetic capitulation of our physicians and mental health professionals.

My daughter spent her childhood happily engaging in what one would call typical, “girly activities,” with no gender-stereotyping encouragement from us at all. Everything changed after she went to college.

The environment of her new city and university celebrated transgender identities. She began speaking to us by phone of being “nonbinary,” which I naively took to mean something like bisexual.

Anxiety and depression then overwhelmed her. She dropped out and moved back to our home town, where she resumed psychiatric care for pre-existing mental health conditions.

Her appearance, always feminine, changed dramatically. A shaved head, boys’ clothes, and obvious unhappiness were now her camouflage from the world. She went from nonbinary to claiming that she was really a boy.

She parroted online advice: “I always knew something was wrong but didn’t have words for it until I started watching videos on Tumblr and YouTube. When I was little, I was afraid to tell you that I didn’t feel right.”

This narrative matched nothing about her past, but I was still naive. Because her psychiatrist did not consider her to be transgender, I assumed she would be unable to get a referral for the testosterone she was determined to start.

I was wrong. In only one visit, and with just a little bit of bloodwork, Planned Parenthood will cheerfully enable young women and men to pursue their “authentic” selves through cross-sex hormones. All that’s needed is a few bucks and signing a form that the risks have been disclosed and understood.

That is the route my daughter took at the tender age of 20, bypassing her psychiatrist altogether.

My husband wrote to Planned Parenthood, explaining her mental health history and providing her doctor’s name and telephone number. Planned Parenthood’s lawyer wrote back curtly that they presume anyone over 18 is capable of giving informed consent.

No matter what anyone thinks of Planned Parenthood’s other services, the fact that they will instantly prescribe powerful hormones with many unknown long-term effects—especially to people with underlying mental health issues—should shock one’s conscience.

People need to know that this is Planned Parenthood’s new line of business.

At the age of 17, after immersion on Tumblr and after two of her oldest and closest friends in high school declared themselves transgender, our daughter told us that she is “really a guy.”

Her therapist diagnosed her as high-functioning on the autism spectrum. The therapist was also quite clear that we would “lose all control over the medicalization” once our daughter turned 18.

As a federal employee, I could not find health insurance that doesn’t cover hormones for self-declared gender dysphoria.

My daughter is now 20, has been on testosterone for a year, and has made an appointment for a consultation about a double mastectomy—all this, even though she can’t legally buy an alcoholic drink.

I can’t get any answers from doctors in response to my questions and concerns about the risks of these “treatments.” I get no answers from mental health professionals about what makes this treatment appropriate—or what makes my daughter different from those young women who are “no longer trans” and have de-transitioned, sometimes after being on hormones for years.

Having to watch these adults enable my daughter to do this with no medical science to back it up is a scenario that I never dreamed any parent would have to face, at least not in the United States.

But this is our reality now—a reality that the mainstream media won’t touch.