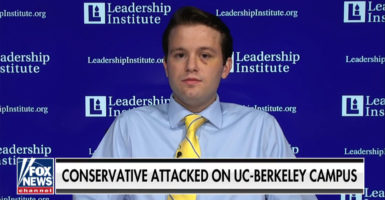 Hayden Williams was attacked at University of California, Berkeley while trying to get students interested in a conservative student organization. (Photo: Screenshot via Fox News)

This transcript is from a Thursday recording of The Daily Signal Podcast at the Conservative Political Action Conference and has been edited for length and clarity. The full interview is available on the podcast here.

Katrina Trinko: We’re here at CPAC and with me is Hayden Williams. You might have heard about him in the news coverage this week. He was at University of California, Berkeley last week trying to get conservative students interested in a conservative student organization, Turning Point USA, I believe, and, Hayden, something pretty dramatic happened.

Hayden Williams: Yeah, some students there asked me to come and help them set up for a protest against this recent hate crime hoax with Jussie Smollett. And that’s basically my job with leadership, to help conservatives recruit new members and hold events and that sort of thing.

We all met on Sproul Plaza on Tuesday around 10 a.m. and we set up our table and brainstormed some signs that we could make and one of them we came up with was “Hate Crimes Hoaxes Hurt Real Victims.” Another one was “This is MAGA Country” because we wanted people to know that this isn’t what we stand for, these sorts of lies that divide people on immutable things.

They’re really divisive and that’s not what we’re about because “This is MAGA Country” is one of the lies Jussie told about his story to try to smear Trump supporters. A lot of these conservatives are Trump supporters, so they wanted to protest this and before I knew it, we’re getting attacked.

Trinko: … And I believe it actually became physical, is that right?

So, we were there for a few hours and I was there with the president and the vice president of the club and when this happened these two guys just approached our table and started cussing at us and asking us, “What are we doing here?” And I could tell they weren’t really there to have a conversation.

I was kind of worried about the safety of the students I was with and my own, so I pulled out my camera like second nature. The leadership issue has training that teaches you how to handle these sorts of situations and so that’s one thing they teach us, just try to document everything.

Trinko: And I think that’s great advice for anyone in a tense situation. Recordings don’t lie.

Williams: Yeah, it’s completely objective and it’s crucial evidence. So I did just that, and whenever I do that, I hope it would diffuse the situation and most of the time it does. Nobody wants to be caught on camera doing something crazy. But these guys did not care.

As soon as I pulled out my phone, one of them said, “You guys are promoting violence,” and then out of nowhere my phone gets smacked out of my hand. I go to pick it up off the ground and then the table gets flipped over and I turn around and this guy is just looking at me with flames in his eyes and he starts telling me, “Get out of my face, get that camera out of my face,” and he starts pushing me and punching at me. It was just a really scary situation.

I’ve got most of it on film but he swatted my phone down about three times in total and the third time he got it I think the video stopped for whatever reason and he took my phone from me.

Luckily there was a third-person angle, some student who was walking by and realized what happened, basically, just took it upon himself to record.

So we have this angle, and if you actually look closely at the video, you can see my phone in this guy’s right hand when he punches me and knocks my hat off my head and then it looks like I’m tussling for his sweater or something, but really I’m just trying to retrieve my phone from him. Fortunately, he drops it and it lands between my legs and I go to pick it up and he kind of walks away, but he’s still yelling.

The really disturbing part though was the people around us that were egging him on. … Some guy was saying, “I’m on your side, you’re winning this fight.” It was just really demented. I don’t care who you are, what you believe, if I see you in a distressed situation like that and you’re being attacked, I’m going to do everything I can to help you out out. I wouldn’t even think about mocking you.

Trinko: Right, no, one would hope that no matter what your political ideology, you wouldn’t support physically hurting someone over it. What has the response been like? Has anyone been charged, or what’s happening?

Williams: It’s still under investigation. We’re not sure who exactly this individual is, but I do have pretty good evidence of his face so it’s my hope that the police will investigate it to the fullest extent they can and arrest this person that did this soon.

My beef is really with some of the people in the campus community, like faculty members and students that were promoting this even on social media—kind of calling this guy a hero after it went viral, saying this is a good thing, basically, we need more of this. And that’s just really disappointing and it goes to show the kind of culture that has been existing at Berkeley and thriving, quite frankly, not just at Berkeley or not just in California, but at campuses across the country. It’s kind of a problem in academia.

That’s on thing I’d like to see is kind of a self-reflection as far as the culture of hostility toward conservatives.

Trinko: And what has the media response been like? I saw The Washington Post had an epic headline that was something like “Conservative punched at UC Berkeley,” “Conservatives upset,” you know, one of those pounce headlines.

Williams: Yeah, I think the same outlet that said Jussie Smollett was assaulted said that I was allegedly assaulted—I believe that was CNN. The liberal media will not want to talk about this because it’s so one-sided, there’s no way to twist the truth to fit their narrative, so they just have to ignore it and hope it goes away and the story dies. But I don’t think we’re going to let this die because this really exposes the double standard and the hypocrisy of the left.

It’s a tragic story, too. You know, I didn’t want to be a victim. I don’t want to be known for this. It just happened. So it’s my hope that other people can realize that they can stand up for what they believe in, too, and once we hold this person accountable, that that’s the proper thing. Sunlight is the best disinfectant.

Trinko: Thank you so much for joining us, Hayden.

Williams: Thanks for having me out.

Trinko: And I hope you get better soon.

Williams: I do too, thank you.