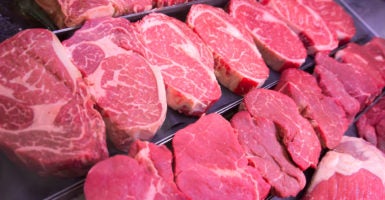 Some state legislators are seeking to limit how meat alternatives are advertised to the public. (Photo: Kryssia Campos/Getty Images)

Veggie burgers don’t come from cows. There’s no such thing as tofu turkey farms—as far as I know.

Consumers know this, but that is not stopping some state legislators from trying to use state consumer protection laws to limit how “meat” alternatives are advertised to the public.

Missouri is the first and only state, to date, to pass such a law.

The state’s 2018 law prohibits “misrepresenting a product as meat that is not derived from harvested production livestock or poultry.” Under the law, “‘misrepresent’ means the use of any untrue, misleading or deceptive oral or written statement, advertisement, label, display, picture, illustration or sample.”

For companies selling products that are not derived from harvested production livestock or poultry, this law appears to restrict their speech well beyond prohibiting the use of the word “meat.”

As a result, this could mean that using animal meat-related terms such as “sausage” for a plant-based product, even if part of a compound name like “veggie sausage,” could violate Missouri law. Companies selling plant-based alternatives to “meat,” as subjectively defined by Missouri, will need to be very careful in how they advertise their products because the law is both unclear and potentially very broad in scope.

Why did Missouri pass such a law, and why is there a sudden push in some other states to pass similar laws? After all, many of these plant-based products have been around a long time without creating consumer confusion.

The answer appears to be good, old-fashioned cronyism.

More than ever, plant-based products are closely approximating the taste of animal meat. Then there is cell-based meat, developed by growing animal meat from animal cells. While still too expensive to be commercially viable, cell-based meat may be widely available soon.

These new products may pose a competitive threat to businesses producing animal meat from slaughtered animals. So instead of embracing private-sector innovation that is meeting consumer demand, some state legislators could be trying to protect favored interests by creating obstacles for this new competition.

In Missouri, there is plenty of evidence that the law had little to do with consumer protection and a lot to do with protecting in-state ranchers. “We wanted to protect our cattlemen in Missouri and protect our beef brand,” explained Republican state Sen. Sandy Crawford, one of the law’s champions.

Prohibitions on how companies sell their alternative products, such as veggie burgers, may actually confuse consumers. After all, consumers have become familiar with specific terminology when buying these products.

These state laws may even discourage companies from selling their products within those states out of fear of being in violation of the law or simply because the restrictions on speech undermine their ability to effectively advertise their products within the states. Violating the Missouri law could actually lead to criminal punishment, including jail time.

It was once mere fantasy for consumers to think they could have slaughter-free product options that genuinely taste like slaughtered animal meat. For many people, these products and those that will come on the market in the near future are truly important to them (e.g. concern about animal welfare).

However, many consumers might consider the plant-based and cell-based products unsuitable alternatives to animal meat from slaughtered animals. For example, some consumers may simply find the idea of eating cell-based meat to be unpleasant.

Consumers, regardless of what “meat” products they choose, should be able to decide what products best meet their needs without government intervention that tries to sway their decisions. States should not be creating obstacles to tilt the market in the favor of one industry over another.

This does not mean states shouldn’t protect consumers from actual misrepresentation, such as a business misleading consumers into thinking a plant-based product is made from animal meat.

When businesses are clearly communicating the nature of their products and there is no evidence of consumer confusion, states shouldn’t create a solution in search of a problem.