What a Denuclearization Agreement With North Korea Should Include 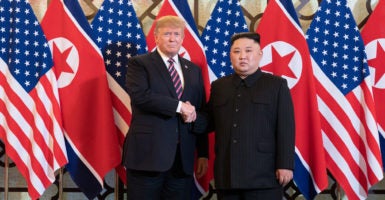 However, simply stated, denuclearization is the final and fully verifiable removal and destruction of a nation’s entire nuclear weapon capabilities.

Trump’s first meeting with Kim in June 2018 was a step in the right direction for diplomatic relations between the two nations. However, in the months since, as National Intelligence Director Dan Coats has reported, North Korea has not made any concrete steps toward denuclearization.

It’s important during this summit that America avoid the mistakes of the past.

Past missteps have included the 2015 Joint Comprehensive Plan of Action between Iran and the so-called P5+1 nations plus the European Union, which ultimately proved to be irredeemably flawed because it allowed Iran to continue to possess enriched uranium and enrichment centrifuges, contained limitations on the ability to inspect anywhere any time, and included sunset clauses on restrictions beginning in as quickly as 10 years.

Similarly, the 1994 Agreed Framework between the U.S. and North Korea was unsuccessful because the lack of detail caused the two nations to spend more time interpreting the agreement than actually implementing it.

Given the hard lessons learned from these past efforts, precisely defining denuclearization takes on a huge degree of importance. In light of this confusion, The Heritage Foundation recently published a report that describes the “gold standard” of final and fully verified denuclearization.

As we describe them, the major elements of a “gold standard” for denuclearization include the following:

First, in addition to signing the United Nations standard nonproliferation documents, the Non-Proliferation Treaty and Additional Protocol, the country must sign a state-specific agreement with tailored protocols and detailed procedures specific to the country undergoing denuclearization.

Second, the country undergoing denuclearization must make a complete and accurate declaration of all current and past nuclear programs, including weapons, fissile material, other nuclear materials, facilities, sites, and intellectual property, including scientists.

Third, compliance to terms must be verified by an empowered and energetic multinational organization constituted with the full backing of the U.S., United Nations, and International Atomic Energy Agency.

Fourth, the designated verifying organization must have guaranteed complete and unfettered access to inspect all declared and undeclared sites within the state without delay. This access must include the ability to take samples.

Fifth, all nuclear materials and facilities must be either removed from the state or irreversibly destroyed, for example, by filling reactor containment vessels with concrete.

Sixth, and finally, all denuclearization restrictions placed on the state must be permanent, and cannot include an end or phase-out date.

By adhering to these six standards, the U.S. can increase global security by greatly increasing the odds that a denuclearized state will remain that way. Additionally, the prospects for cheating or subterfuge are reduced to the lowest level possible.

Make no mistake, successful denuclearization is hard. Agreeing to these conditions represents a degree of relinquishment of state sovereignty.  But given the right mixture of incentives and relief from sanctions, it could be in the best interest of all parties.