Venezuela and the Myth of Kinder, Gentler Socialism 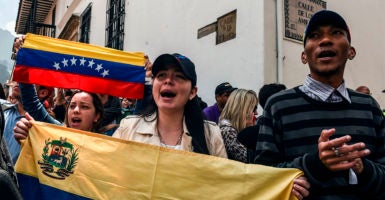 Supporters of Venezuelan interim President Juan Guaido demonstrate on Feb. 25 in front of the Foreign Ministry in Bogota as he holds a meeting with members of a multinational support group in the framework of the Lima Group to discuss a joint strategy to resolve Venezuela's crisis. (Photo: Joaquin Sarmiento/AFP/Getty Images)

Venezuela is a socialist country. Venezuela is also a dictatorship. Currently, Venezuela has fallen into open violence and complete chaos, with the strongman Nicolas Maduro ordering troops to open fire on those attempting to bring humanitarian aid into the country.

Yet, strangely, Maduro still has his defenders.

Sen. Chris Murphy, D-Conn., said in full 9/11 truther mode, “Democrats need to be careful about a potential trap being set by Trump et al in Venezuela. Cheering humanitarian convoys sounds like the right thing to do, but what if it’s not about the aid?”

Fresh face of the Democratic Party Rep. Alexandria Ocasio-Cortez, D-N.Y., has remained shockingly silent about Venezuela, except to tell The Daily Caller News Foundation, “I think that, you know, the humanitarian crisis is extremely concerning but, you know, when we use non-Democratic means to determine leadership, that’s also concerning, as well.”

Rep. Ilhan Omar, D-Minn., another fresh face of the Democratic Party, grilled U.S. envoy to Venezuela Elliott Abrams in an obvious attempt to stall on behalf of a gentler approach to Maduro.

Why the shocking unwillingness by the socialist hard-liners in the Democratic Party to condemn Maduro and join the rest of the world in calling for his ouster?

After all, we’ve been assured by Sanders, AOC, Omar, and others that true socialism isn’t at stake in Venezuela—true socialism can be found in nations like Sweden, Norway, and Denmark. Yet even so, these socialist Democrats can’t find it in their hearts to cut ties with Venezuela.

Perhaps it’s because Sanders and his crowd understand full well that Venezuela is an excellent case study in socialism—nationalization of major industries by a centralized government, abolition of the profit motive, and redistribution of resources via tyranny.

After all, it wasn’t that long ago that Sanders was praising the Soviet Union (he said it had “a whole variety of programs for young people and cultural programs which go far beyond what we do in this country”), Nicaraguan Sandinista Daniel Ortega, and Cuba’s Fidel Castro (” … he educated their kids, gave their kids health care, totally transformed the society.”).

And then there’s the inconvenient fact that the countries that Sanders himself calls socialist totally reject the label.

Former Swedish Prime Minister Carl Bildt launched into Sanders this week, stating, “Bernie Sanders was lucky to be able to get to the Soviet Union in 1988 and praise all its stunning socialist achievements before the entire system and empire collapsed under the weight of its own spectacular failures.”

In 2015, Danish Prime Minister Lars Rasmussen scoffed at Sanders’ dreams of a socialist utopia, noting, “The Nordic model is an expanded welfare state which provides a high level of security to its citizens, but it is also a successful market economy with much freedom to pursue your dreams and life your life as you wish.”

Here is the sad truth about socialism: Socialism drives economies into the ground in exact proportion to its prominence in the economy. Capitalism creates prosperity. It’s convenient for Sanders and company to point to the Nordic countries as models of socialism when they are obviously founded on free markets, with socialistic redistribution schemes stacked atop that free-market foundation.

But deep down, Sanders knows that the truer reflection of socialism lies in Venezuela, Cuba, and the Soviet Union. And that’s why Sanders simply can’t bring himself to disown Venezuelan socialism, even to prop up the lie that socialism wasn’t truly tried in Venezuela.