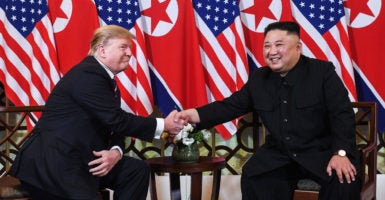 Since the first U.S.-North Korea summit in Singapore, there has been no progress on North Korean denuclearization.

And there has been no reduction in the North Korean nuclear, biological, and chemical weapon threat to the United States and its allies.

Rather than denuclearizing, the regime instead continues to nuclearize with new capabilities at an accelerated rate.

The second summit must not repeat the mistakes of the first in which the U.S. accepted another vague flawed agreement, made unilateral concession unreciprocated by North Korean actions, and excessively praised Kim Jong Un, who is on the U.S. sanctions list for crimes against humanity.

President Donald Trump’s decision to cancel allied military exercises has been the gift that keeps on giving—for North Korea.

There are concerns in Washington, Seoul, and Tokyo that Trump may agree to several North Korean proposals that appear beneficial but contain hidden perils, such as signing a peace declaration, acceding to an “ICBM only” deal, or committing to reducing U.S. forces in Asia.

Much is riding on the outcome of the next Trump-Kim summit.

It must have substance rather than simply the pomp and circumstance of the first.

The administration has sacrificed much-needed leverage on the nuclear and human rights issues.

In Hanoi, Trump should:

1. Insist on a detailed, comprehensive roadmap to denuclearization that includes intrusive verification requirements.

2. Refuse to sign a meaningless peace declaration that does not reduce the North Korean military threat.

5. Maintain sanctions until the triggering actions are removed.

6. Require North Korea to abide by international requirement to denuclearize before receiving any financial aid from the international community.