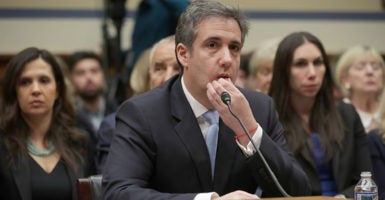 Soon to serve a prison sentence for, among other things, lying to Congress, Michael Cohen took a parting shot Wednesday at his old boss, President Donald Trump, in testimony on Capitol Hill.

“He’s a racist, he’s a con man, and he’s a cheat,” Cohen told the House Oversight and Government Reform Committee.

“The last time I appeared before Congress, I came to protect Mr. Trump. Today, I’m here to tell the truth,” Cohen said.

Cohen’s testimony assailed Trump’s character and even accused the president of possible crimes, but he firmly disputed unsubstantiated claims cited by House Democrats that went off subject. Those included whether Trump had fathered a “love child,” whether he paid for any medical procedures for women who were not in his family, and whether he assaulted his wife in an elevator.

Cohen said all of those were false rumors.

Here are six key takeaways from a contentious hearing.

1. Trump’s Presidential Run ‘Was My Idea’

Cohen said that in 2011, he approached Trump about running for president, and started the website, ShouldTrumpRun.com.

“It was my idea. I saw a document in the newspaper that said, ‘Who would you vote for in 2012?’ Six percent of the people turned around and said they’d vote for Donald Trump,” Cohen said. “So I  brought it into his office and I said, ‘Mr. Trump, take a look at this. Wouldn’t that be great?’ And that is where it all started.”

Trump hinted about running in 2012, but opted out.

“Donald Trump is a man who ran for office to make his brand great, not to make our country great,” he told the committee.

He had no desire or intention to lead this nation—only to market himself and to build his wealth and power. Mr. Trump would often say, ‘This campaign was going to be the greatest infomercial in political history.’

Rep. Glenn Grothman, R-Wis., took issue with that, saying that when he encountered Trump during the campaign, the candidate seemed determined to win.

“I dealt with President Trump several times as he was trying to get Wisconsin,” Grothman said. “He was always confident. He was working very hard.”

2. “I Wouldn’t Use the Word ‘Colluding’” With Russia

Cohen said that Trump was aware of the plans for a Trump Tower in Moscow. Cohen pleaded guilty to lying to Congress about the Moscow project.

Cohen said several times that Trump did not “directly” order him to lie to Congress.

“He did not use those words,” Cohen said, but explained that those who worked for Trump understood what he expected of them.

Cohen said he thought Trump had prior knowledge of the Trump Tower meeting in New York in June 2016 with a Kremlin-linked lawyer. Donald Trump Jr. has taken the blame for the meeting.

“Mr. Trump had frequently told me and others that his son Don Jr. had the worst judgment of anyone in the world, and also that Don Jr. would never set up any meeting of any significance alone—and certainly not without checking with his father,” Cohen said.

Rep. Debbie Wasserman-Schultz, D-Fla., asked, “Is it possible the whole [Trump] family is conflicted or compromised with a foreign adversary in the months before the election?”

She later asked, “Do you believe that he would cooperate or collude with a foreign power to win the presidency? Is he capable of that?”

On that point, Cohen wavered.

“Mr. Trump is all about winning. He will do what is necessary to win,” he said, but he added, “I wouldn’t use the word ‘colluding.’

“Was there something odd about the back-and-forth praise with [Russian President Vladimir] Putin? Yes, but I’m not really sure that I can answer that question in terms of collusion. I was not part of the campaign. I don’t know the conversations Mr. Trump had with other individuals.”

The disbarred lawyer said he was present when Trump got a call from Trump supporter Roger Stone about his talks with Julian Assange about hacked emails on WikiLeaks.

“Mr. Stone told Mr. Trump that he had just gotten off the phone with Julian Assange and that Mr. Assange told Mr. Stone that, within a couple of days, there would be a massive dump of emails that would damage Hillary Clinton’s campaign,” Cohen said. “Mr. Trump responded by stating to the effect of ‘Wouldn’t that be great?’”

Later in the hearing, Rep. Thomas Massie, R-Ky., noted that Assange announced weeks before the release that information was forthcoming on Hillary Clinton on WikiLeaks.

Federal prosecutors in the Southern District of New York said Cohen was seeking a job in the Trump administration.

Cohen was careful not to call that a lie, but said instead that it wasn’t accurate.

He insisted he always wanted to be the president’s personal lawyer, in part because he and the president would lose attorney-client privilege if Cohen were a government employee.

Rep. Michael Cloud, R-Texas, read from the federal prosecutors’ documents that said, “Cohen’s criminal violations in the federal election laws were also stirred, like others’ crimes, by his own ambition and greed.

Cohen privately told friends and colleagues, including in seized text messages, that he expected to be given a prominent role in the new administration.

“When that did not materialize, Cohen found a way to monetize his relationship and access with the president,” the document said.

Cloud asked, “Were they lying, or are you lying today?”

Rep. Jim Jordan, R-Ohio, the ranking member of the oversight committee, accused Cohen of being angry that he didn’t get a White House job.

Cohen became defensive on that point.

“I was extremely proud to be personal attorney to the president,” Cohen said. “I did not want to go to the White House.”

“He once asked me if I could name a country run by a black person that wasn’t a ‘s—hole,’” he said. “This was when Barack Obama was president of the United States.”

“While we were once driving through a struggling neighborhood in Chicago, he commented that only black people could live that way, and he told me that black people would never vote for him because they were too stupid,” Cohen added.

Rep. Mark Meadows, R-N.C., invited Lynne Patton, a former employee of the Trump Organization who is black, to the hearing.

“You made some very demeaning comments about the president that Ms. Patton doesn’t agree with,” Meadows told Cohen. “She says, as a daughter of a man born in Birmingham, Alabama, that there is no way she would work for an individual who was racist. How do you reconcile the two of those?”

Cohen responded, “As, neither should I, as the son of a Holocaust survivor.”

Meadows said he has talked to Trump about 300 times in private conversations and never heard him say anything even remotely racist.

Cohen said he secretly recorded Trump about 100 times over 10 years, but does not have him saying racist things on the recordings.

“Do you have proof? Yes or no?” Meadows persisted.

Cohen responded, “Yes,” adding: “Ask Ms. Patton how many people who are black are executives at the Trump Organization. The answer is zero.”

“Mr. Trump is a con man. He asked me to pay off an adult film star with whom he had an affair, and to lie about it to his wife, which I did,” Cohen said. “Lying to the first lady is one of my biggest regrets, because she is a kind and good person.”

Cohen told members of the committee they didn’t have to just believe him, because he was providing what he called “irrefutable” documentation, such as a copy of a check—an installment of a reimbursement for his payment of “hush money” to Daniels.

“I am providing a copy of a $35k check that President Trump personally signed from his personal bank account on August 1, 2017,” he said, adding, “pursuant to the cover-up, which was the basis of my guilty plea, to reimburse me.”

He later explained: “There were 11 checks I received for the year. … I can get copies.”

Asked if there were more alleged Trump paramours beside Daniels and Playboy model Karen McDougal, Cohen said he didn’t know.

“It’s certainly the two that we know about,” he said.

Many Republicans criticized committee Democrats for holding the hearing while Trump is in Vietnam for a summit with North Korean dictator Kim Jong Un.

Cohen made Vietnam part of his remarks, referring to Trump getting draft deferments during the Vietnam War.

“Mr. Trump claimed it was because of a bone spur, but when I asked for medical records, he gave me none and said there was no surgery,” he said.

“He told me not to answer the specific questions by reporters, but rather offer simply the fact that he received a medical deferment,” Cohen added.

“He finished the conversation with the following comment: ‘You think I’m stupid? I wasn’t going to Vietnam,’” Cohen said. “I find it ironic, President Trump, that you are in Vietnam right now.”