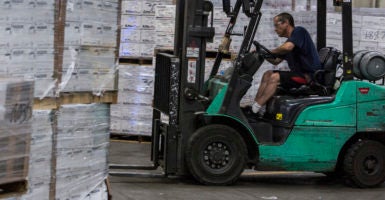 U.S. trade barriers cause Americans who buy products made in other countries to pay higher prices, including a hidden tax paid to the federal government. Pictured: A forklift driver moves pallets of nails July 9, 2018, inside a warehouse at Mid Continent Nail Corp. in Poplar Bluff, Missouri. (Photo: Brad Vest for The Washington Post via Getty Images)

“Reciprocal trade policy” sounds good in theory, but the proposed Reciprocal Trade Act sounds less like the golden rule—“Do unto others as you would have them do unto you” (Matt. 7:12)—than the ancient Code of Hammurabi: “An eye for an eye, a tooth for a tooth.”

The U.S. Reciprocal Trade Act would cause unnecessary, self-inflicted pain, since all Americans benefit from international trade.

That’s because if a tariff or non-tariff barrier (any government-imposed measure or policy that restricts or impedes international trade in goods besides a tariff, such as an export subsidy or import quota) on a U.S. export to a particular country were higher than what we impose on the same good from that other country, the bill would allow the president to retaliate by raising a trade barrier equal to theirs.

The problem with that is, it’s Americans who actually pay the cost when U.S. trade barriers are raised, and it is thus Americans who would be retaliated against by the Reciprocal Trade Act.

Here are a few of the problems with the measure, as introduced in late January by Rep. Sean Duffy, R-Wis.

All three of these options are harmful to the U.S. economy.

The National Taxpayers Union Foundation earlier this month published a timely issue brief on the subject titled “Reciprocity for Disaster”:

Since World War II, treating our trading partners as allies rather than adversaries has paid enormous dividends for Americans.

Just since 1990, world tariffs have fallen by nearly two-thirds as U.S. exports more than doubled, even after adjusting for inflation.

The Reciprocal Trade Act would turn this successful approach to trade on its head.

Countries around the globe have been rolling back protectionist trade policies for decades, leading to a richer and more prosperous world.

Since 1995, the first year The Heritage Foundation began compiling the Index of Economic Freedom, the global average market openness score in the index has risen from 55.4 to 60.2. During that time, the percentage of the global population living in grinding poverty has fallen by two-thirds, to only about 10 percent.

That’s not surprising, because the surefire way to lift people up from poverty is to allow them to keep their God-given right of economic freedom. Freedom to trade is a major component of that.

While the U.S. economy has become more vibrant over the past two years, the coming months present unique opportunities to sustain that dynamism and implement more freedom-oriented economic policies.

To that end, it’s critical that the U.S. economy remain open to flows of international trade and investment. Protectionist policies are certain to hamper growth and reduce prosperity within the U.S., for individuals and businesses alike.

Delivering on policies that promote economic freedom in international trade and investment is the key to making sure the rebound in economic dynamism doesn’t grind to an abrupt halt.