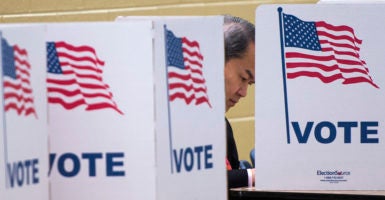 Less than one week after Georgia Democrat Stacey Abrams made inflammatory claims in her State of the Union response about an epidemic of “voter suppression” jeopardizing the character of our nation, the National Bureau of Economic Research released a study that demonstrates once again that voter ID laws have no measurable impact on voting behavior.

This latest study echoes the conclusion of others, including a landmark report by The Heritage Foundation in 2007 finding that voter ID laws don’t reduce voter turnout, including among African-Americans and Hispanics. These voters were just as likely to vote in states requiring photo identification as in those that don’t.

Researchers for the National Bureau of Economic Research found that between 2008 and 2016, voter ID laws had “no negative effect on registration or turnout, overall or for any specific group defined by race, gender, age or party affiliation.”

The new study also concluded that these results “cannot be attributed to mobilization against the laws,” contradicting critics who say election turnout has been sustained only by such campaigns.

According to the study, voter registration and turnout rates did not change to any significant extent after voter ID laws took effect. Out of the millions of registered voters the researchers studied over eight years, no statistically observable change in voting behavior could be attributed to voter ID laws.

Among a variety of minority groups and political affiliations, no significant change in turnout occurred after voter ID laws went into effect. It should be noted, though, that Hispanic voter turnout actually increased in states with ID requirements, when compared to states without them. Clearly, the decrease erroneously claimed by critics has not happened.

Contrary to the commonly heralded assumption that voter ID laws mobilize political backlash, this research shows the laws have no significant impact on four different measurements of political mobilization: campaign contact, frequency of campaign signs, volunteering for campaigns, and levels of campaign contributions. These activities appear to occur at nearly identical rates in states with and without voter ID laws.

Still, many liberal groups have ignored the findings and focused instead on the study’s second contention: that voter ID laws have “no significant effect” on deterring fraud. To reach this conclusion, researchers reviewed the voter fraud datasets of both The Heritage Foundation and a liberal organization, News21, and used them to measure the frequency of fraud over time.

However, as Heritage has explained, its database of almost 1,200 cases is a representative sampling of election fraud cases from across the country and “not an exhaustive and comprehensive list.” This database is intended to demonstrate the many ways in which fraud is committed; it does not capture the full extent of electoral fraud in the United States.

Most importantly, the research fails to take into account or measure whether citizens believe voter ID laws increase the chance of being caught in the act of fraud. A measure of these attitudes before and after a state passes voter ID is critical to measuring the deterrent effect of ID laws.

Research strongly underscores the fact that the certainty of being caught is one of the biggest factors in deterring crime. Without an understanding of their deterrent value, it is impossible to measure the effectiveness of ID laws.

The reality is, election fraud often goes undetected; even when it is discovered, investigators and prosecutors often opt to take no action. In other words, no reliable data exist on the true scope or frequency of fraud, and Heritage’s database can’t be treated as a proxy. Statistical claims based on the database should be treated with great skepticism.

Nor can voter fraud prosecutions be used to measure the overall scope of fraud. That reasoning was roundly rejected by the 7th U.S. Circuit Court of Appeals in Crawford v. Marion County Election Board, a decision that the Supreme Court affirmed when it upheld Indiana’s voter ID law. The 7th Circuit opinion noted:

But the absence of prosecutions is explained by the endemic under-enforcement of minor criminal laws (minor as they appear to the public and prosecutors, at all events) and by the extreme difficulty of apprehending a voter impersonator. He enters the polling places, gives a name that is not his own, votes, and leaves. If later it is discovered that the name he gave is that of a dead person, no one at the polling place will remember the face of the person who gave that name, and if someone did remember it, what would he do with the information?

As the 7th Circuit said, such fraud “has a parallel to littering, another crime the perpetrators of which are almost impossible to catch.”

When a lawbreaker is “almost impossible to catch,” states are faced with two options, according to the court: States may “impose a very severe criminal penalty” or “take preventative action, as Indiana had done by requiring a photo ID.”  And that law has been in place for more than a decade, with none of the problems critics predicted.

The researchers at the National Bureau of Economic Research also failed to realize that a voter ID requirement can stop other types of fraud in addition to impersonation of another voter. It potentially may prevent individuals from voting using false and fictitious registrations; prevent noncitizens from casting ballots; catch out-of-state residents who are registered in multiple states; and make absentee ballot fraud harder to commit in states such as Kansas that have extended the ID requirement to absentee ballots.

This latest research confirms that states are justified in enacting voter ID laws to protect their electoral integrity. Such laws don’t deter eligible voters from registering and voting, and they do not disenfranchise minority voters.

As the Commission on Federal Election Reform, headed by former President Jimmy Carter and former Secretary of State James Baker, said in 2005:

The electoral system cannot inspire public confidence if no safeguards exist to deter or detect fraud or to confirm the identity of voters. Photo IDs currently are needed to board a plane, enter federal buildings, and cash a check. Voting is equally important.

Is voter ID the only reform that states need to implement to ensure the integrity and security of the election process? Certainly not. But it is one of the many steps states should take to safeguard both voting in person and by absentee ballot.