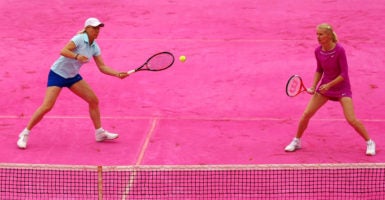 Martina Navratilova is an 18-time Grand Slam tennis champion, but now, she’s creating a racket over something else—transgenderism.

Turns out, refusing to stick to the LGBT talking points can land you in a lot of hot water with the left, even if you’re someone as famous as this tennis legend.

After years of identifying as a lesbian, Navratilova has been one of sports’ most visible LGBT faces. But not even she is allowed to commit the movement’s most unforgivable crime—speaking the truth.

With society knee-deep in a gender identity crisis, some pro sports are floating the idea of relaxing the rules on traditional competition. If a man identifies as a woman, extremists argue, they should be allowed to compete as one.

A lot of people—including Navratilova—disagree, arguing that it would create an unfair advantage for men.

For the first time, she explained her position in depth, writing in The Sunday Times of London: “The rules on trans athletes reward cheats and punish the innocent.”

She added, “Letting men compete as women simply if they change their name and take hormones is unfair—no matter how those athletes may throw their weight around.”

This follows a flare-up in December when she tweeted, “You can’t just proclaim yourself a female and be able to compete against women. There must be some standards. And having a penis and competing as a woman would not fit that standard.”

Activists seethed then that she was “transphobic” and intolerant. Not surprisingly, they didn’t take kindly to her latest column either.

“To put the argument at its most basic: a man can decide to be female, take hormones if required by whatever sporting organization is concerned, win everything in sight and perhaps earn a small fortune, and then reverse his decision and go back to making babies if he so desires,” she fumed. “It’s insane, and it’s cheating. I am happy to address a transgender woman in whatever form she prefers, but I would not be happy to compete against her. It would not be fair.”

Within hours of publication, her disloyalty became costly. An LBGT nonprofit that Navratilova has served for years announced it was kicking her off the board. The decision took a lot of people by surprise, especially since she’d been one of Athlete Ally’s most outspoken voices for “inclusion.”

It also, the Washington Examiner pointed out, “demonstrates the clash many predicted would happen between the gay and transgender movements.”

Rachel McKinnon, a male cyclist who competed as a woman and won the Masters Track Championship, blasted Navratilova as a traitor who can’t possibly be “pro-trans” if she refuses to let men dominate women’s tennis.

“Genitals do not play sports,” he fired back, proving just how little he understands about the actual debate.

Of course, genitals don’t play sports; fundamentally different, physiologically diverse sexes do. Despite what the far left believes, there’s a lot more at work here than a few reproductive organs.

By their very DNA, men and women are profoundly dissimilar creatures. Strength, testosterone levels, muscle makeup—they’re what separates us into unique and complementary beings.

Expect more of this societal confusion as we move at warp speed in this postmodern civilization, where cultural “norms” are in constant flux. What was OK yesterday because a majority seemed to accept it (or at least did not protest against it, like #MeToo) is seen as wrong today.

The truth is, it was always wrong.

There was a time in our country when we recognized and accepted transcendent truth—what could be described as the moral law of God or the laws of nature and nature’s God. But now society makes up its own truth du jour, based on the prevailing winds of culture that, as we see, often change direction.

It may not be popular, but truth will never change, and for that reason, it provides a firm foundation for individuals and societies to stand.