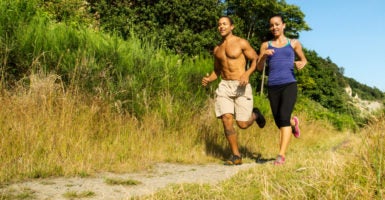 According to a three-judge panel of one of the country's highest courts, there shouldn't be any difference between women's breasts and men's. (Photo: Cavan Images/Getty Images)

It’s the sort of court case that belongs on The Onion.

But Free the Nipple-Fort Collins v. City of Fort Collins is a real lawsuit all right—with real implications. (Legalized toplessness, if you’re wondering.)

For years, conservatives have talked about the slippery slope of the gender debate. Keep your shirt on, liberals said. Well, Coloradans—you first.

Call it naked ambition, but when radical feminists in Fort Collins decided to fight the city’s ban on toplessness, most people didn’t think they had a chance.

That might have been true a decade ago, but now, as the 10th U.S. Circuit Court of Appeals is proving, anything is possible on this runaway train of gender equality.

According to a three-judge panel of one of the country’s highest courts, there shouldn’t be any difference between women’s breasts and men’s. And suggesting otherwise is, in its opinion, discrimination.

“A breast is a breast, is it not?” Judge Mary Beck Briscoe fired back at the city’s attorney, Andrew Ringel, who dared to argue that men’s and women’s bodies are different—and must be regulated accordingly.

In an exchange that sounded like something on a pay-per-view parody, Ringel answered, “A female breast is a female breast, your honor.” Breastfeeding is allowed in public, Briscoe insisted.

If that hasn’t resulted in “societal turmoil,” why should toplessness? Outlawing women from showing off their bodies might have a negative effect on women, the judge suggested.

Free the Nipple attorney Andrew McNulty insisted that wasn’t fair. Banning toplessness is like bringing back the Jim Crow laws of the South, he said, in one of the more jaw-dropping moments of an already absurd hearing.

The judges must have agreed, because they ruled that Fort Collins’ public decency rule “perpetuates a stereotype engrained in our society that female breasts are primarily objects of sexual desire, whereas male breasts are not.”

Judge Harris Hartz, the lone voice of reason on the three-judge panel, couldn’t believe his ears. In his dissent, he talked about how ridiculous it was to pretend that women and men are not different.

Plaintiffs’ ‘evidence’ that the breasts of men and women are essentially identical cannot be taken seriously … .

Are laws regulating pornography and obscenity invalid if the societal harms they are intended to prevent are caused by cultural influences rather than purely biological ones?

At least he got that off his chest. Meanwhile, this whole case reveals (quite literally) where the forces of gender equality have taken us.

As soon as this country starts jettisoning moral absolutes, there’s no stopping this kind of insanity. And that’s a shame, especially for all of us who care about public safety and decency.

For now, the judges at least admit that they’re in the “minority” on this kind of thinking. But even so, National Review’s Ed Whelan explains, this ruling helps set up a split in the circuit courts. Perhaps, he half-jokes, “it will soon be up to the Supreme Court to address the cleavage between the Tenth Circuit and the Seventh Circuit.”