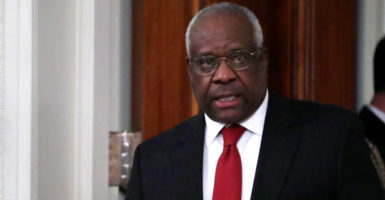 "In short, there appears to be little historical evidence suggesting that The New York Times actual-malice rule flows from the original understanding of the First or 14th Amendment," writes Justice Clarence Thomas. (Photo: Chip Somodevilla/Getty Images))

A day after Supreme Court Justice Clarence Thomas signaled it might be time to review a landmark ruling on libel law, President Donald Trump cheered the libel lawsuit of a Covington, Kentucky, high school student against The Washington Post.

Although Trump has repeatedly insisted that Congress change existing libel laws to make it easier to sue news organizations, the 1964 unanimous Supreme Court ruling in New York Times v. Sullivan determined that public figures must prove a false report was made with “actual malice” or “reckless disregard” of the truth.

Thomas, on Tuesday, in a concurring opinion in an unrelated case questioned the libel precedent, asserting that the First and 14th Amendments “did not require public figures to satisfy any kind of heightened liability standard as a condition of recovering damages.”

It’s questionable whether such a standard is applicable to the case of Nick Sandmann, the Kentucky high school student whose parents are suing the Post for $250 million, since he was unknown to most of the public before the Post and other media outlets reported on a video clip in which he initially appeared to be bullying a Native American activist.

However, in the matter Thomas was writing about, the plaintiff—Kathrine McKee, suing a lawyer for Bill Cosby—was considered a “limited-purpose public figure.” In short, that would be a normally private figure who puts himself or herself into the public eye.

“McKee was deemed to be a limited-purpose public figure. She has challenged that, but she did inject herself into an ongoing controversy,” said Mark Bailen, outside legal counsel for the Society of Professional Journalists.

“Could Nick Sandmann be a limited-purpose public figure?” Bailen said. “He did a major national network television interview, and he was in the middle of a controversial event on the steps of the Lincoln Memorial. It’s not a slam dunk that he is a private figure as he claims.”

The lawsuit, filed in U.S. District Court for the Eastern District of Kentucky, asserts the Post published seven inaccurate stories over a span of three days beginning Jan. 19, which it called a “modern-day form of McCarthyism.”

Unlike the Post’s abuse of the profession of journalism, Plaintiffs do not bring this lawsuit to use the judicial system to further a political agenda. This lawsuit is brought against the Post to seek legal redress for its negligent, reckless, and malicious attacks on Nicholas, which caused permanent damage to his life and reputation.

A Post spokeswoman, Kristine Coratti Kelly, said in a statement published in the newspaper: “We are reviewing a copy of the lawsuit, and we plan to mount a vigorous defense.”

The plaintiff would likely have to demonstrate the Post had substantial doubt about the truth of what it published at the time to qualify as “reckless disregard,” Bailen said.

“The complaint cites negligence, asserting a departure from the SPJ Code of Ethics, but the code provides guidance and is not a legal standard,” he said.

The Post and other media outlets reported that Sandmann and his classmates—after attending the annual March for Life in Washington on Jan. 18—were bullying Native American activist Nathan Phillips, based on a partial video clip.

However, other media widely reported on the full video that demonstrated that wasn’t the case and that Sandmann and his classmates were the ones being harassed, by a group called the Black Hebrew Israelites.

The cases of Sandmann and McKee are different because Sandmann didn’t inject himself into the media spotlight. Sandmann’s national TV interview came after the reported incident, said Hans von Spakovsky, senior legal fellow at The Heritage Foundation.

“He was waiting on a bus in front of the Lincoln Memorial,” vons Spakovsky told The Daily Signal. “The Washington Post may argue he’s a public figure because he went to a protest. This is an easier case for him to prove libel. But libel cases are always difficult.”

In a tweet Wednesday, Trump quoted from the lawsuit and wrote, “Covington student suing WAPO. Go get them Nick. Fake News!”

On Sunday, Trump seemed to suggest in a tweet there should be laws against unfair characterizations of him like those on NBC-TV’s “Saturday Night Live.”

Thomas questioned libel law precedent in a concurring opinion, with the court declining to accept a defamation case from McKee, who had accused Cosby of rape. She tried to sue Cosby’s lawyer for a defamatory letter, but for the purposes of the case, she was considered a public figure.

Thomas said it could be time to revisit the New York Times v. Sullivan precedent.

Far from increasing a public figure’s burden in a defamation action, the common law deemed libels against public figures to be, if anything, more serious and injurious than ordinary libels.

Libel of a public official was deemed an offense ‘most dangerous to the people, and deserv[ing of] punishment, because the people may be deceived and reject the best citizens to their great injury, and it may be to the loss of their liberties.’

In short, there appears to be little historical evidence suggesting that The New York Times actual-malice rule flows from the original understanding of the First or 14th Amendment.

Thomas’ opinion prompted concern among advocates of a free press.

“It’s deeply troubling that Justice Thomas has suggested the court revisit a settled precedent that serves the most fundamental goals of the First Amendment: encouraging and protecting wide-open debate about public issues, including criticism of public officials,” Katie Townsend, legal director for the Reporters Committee for Freedom of the Press, told The Daily Signal in a statement.

“Supreme Court justices and judges across the country—appointed by both parties—have applied the ‘actual malice’ standard established in New York Times v. Sullivan for the last five decades, reflecting a national consensus that it’s both vital and necessary to protect free speech and our free press,” Townsend wrote.

L.B. Sullivan, a police commissioner in Montgomery, Alabama, filed the lawsuit regarding a full-page ad in the The New York Times supporting the civil rights movement in the South. He sued, charging some of the information was inaccurate.

Von Spakovsky said given the new makeup of the Supreme Court, it’s possible the precedent will be revisited. He added, however, that the argument does not fall entirely along partisan or ideological lines.