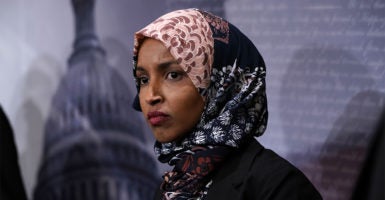 Anti-Semitic conspiracy theorist and Democratic Rep. Ilhan Omar—someone who had previously argued that Jews hypnotized the world regarding their “evil” deeds—recently claimed that Americans only support Israel because of the American Israel Public Affairs Committee’s “Benjamins”—and then retweeted a person pointing out that she might as well call all Jews “hook-nosed.”

Though House Speaker Nancy Pelosi, who put Omar on the House Foreign Affairs Committee, offered a condemnation of Omar’s comments, many progressives jumped immediately to her defense.

Some of them implored Omar to stop deploying these ugly “tropes” because they undermine what is a completely reasonable position toward the Jewish state. (Omar has since apologized, promising to avoid using insulting stereotypes when peddling her anti-Semitism.)

The problem is that “anti-Zionism”—the predominant justification for violence, murder, and hatred against Jews in Europe and the Middle East—is a growing position on the American left.

Though Omar embraces the worst caricatures of this ideology, it’s her core contention regarding the Jewish state—not her clumsy “Protocols of the Elders of Zion”-style insults, which are just a manifestation of her underlying position—that is most consequential.

One of the dishonest arguments regarding Omar and Rep. Rashida Tlaib, D-Mich., who we recently found out wrote a piece for a publication of Nation of Islam leader Louis Farrakhan, is that they are merely being “critical of Israel.” Yet no serious person has ever made the claim that being critical of Israel’s policies is anti-Semitic.

Israel has had both left-wing and right-wing governments over the years. And like governments in any liberal democracy, they can be corrupt, misguided, or incompetent. Millions of Israelis are critical of their own nation’s policies every year without any fear of repercussions. Israel isn’t Iran or Turkey, countries that most of Israel’s critics never disparage.

1) Do they engage in “delegitimization” of the nation’s existence as does every supporter of the boycott, divestment, and sanctions movement?

2) Do they engage in “demonization” of the country as do people who claim that Israelis hypnotize the world for evil and that they go around murdering children for kicks?

3) Do they engage in “double standards”—for example, having an obsession with Israel and the American Israel Public Affairs Committee while ignoring illiberalism found throughout the Islamic world and ignoring such things as Muslim concentration camps in China?

The second myth pushed by Omar’s defenders is that Israel dictates American foreign policy with its shekels. The first part of this argument is absurd when one considers that over the past few years, the American government passed the Iranian nuclear deal—which Israel saw as an existential threat—and the American president has embraced the idea of withdrawing troops from Syria.

Then, of course, there’s a significant difference between contending that you disagree with the American Israel Public Affairs Committee’s positions and contending that the lobbying group bribes Americans with lots of Benjamins.

For starters, it’s a lie, because the American Israel Public Affairs Committee doesn’t give any money to politicians. And as Emily Zanotti and others have pointed out, the lobbying organization with all its supernatural ability to hypnotize lawmakers, spends about $3.5 million on lobbying for Israeli policies in a good year.

“It barely even cracks the top 50, is dwarfed by the beer wholesalers,” Zanotti writes. “In contrast, Planned Parenthood’s PAC spent $20M in 2016.”

Although it might be tough for progressives to understand, many Americans still prefer Israel over Hamas, the Palestine Liberation Organization, and Iran for reasons other than money—e.g., a shared understanding of liberalism, theological reasons, historical ties, political realities, and practical geopolitical reasons.

I do concede that contemporary progressives may not embrace these values anymore. For many decades, however, polls showed widespread support for Israel. The American Israel Public Affairs Committee’s success is predicated on that support.

Some of Omar’s defenders also engaged in a little whataboutism by pointing out that Republicans have had their own anti-Semitic problems. I’m sure they have.

But I hate to break the news to people: Being critical of billionaire activist George Soros, who happens to be Jewish but holds positions on Israel that are generally in line with Omar’s, is not automatically anti-Semitic—no more than attacking Sheldon Adelson is necessarily anti-Semitic. Omar’s Jewish stereotypes were aimed at all defenders of Israel.

It will be interesting to see how the Democratic Party’s presidential hopefuls react to Omar’s comments. Their positions have increasing currency in the activist wing of their party.

On this issue, there is a big rift opening between young and old. That does not bode well for the establishment or Jews.