Sen. Braun to Congress: No Budget? No Pay for You. 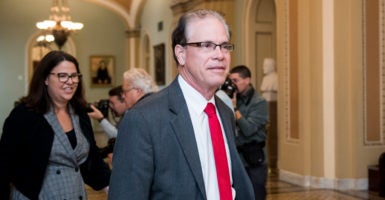 The U.S. national debt hit $22 trillion this week for the first time in history.

Meanwhile, lawmakers in Congress are ignoring the law and their primary job responsibility by not passing a budget for the federal government. Instead, politicians lurch from one fiscal deadline to the next with no plan to control spending and debt.

Sen. Mike Braun, R-Ind., wants to change that by holding his fellow representatives accountable for failing to do the one big job they had: control the power of the purse.

His proposal is the No Budget, No Pay Act, which would discontinue paying lawmakers’ salaries after Oct. 1 if they fail to pass a budget resolution and spending bills by that deadline.

This is a promising proposal in that it would give lawmakers more of a stake in completing a successful budget process cycle. The last time lawmakers passed all 12 spending bills on time was in 1996.

The policy would take effect after Feb. 21, 2021, in compliance with the 27th Amendment to the Constitution, which limits Congress from changing compensation during a current session of Congress.

Most Americans have to perform at least the minimal requirements of their jobs if they want to get paid. The same should hold for lawmakers. That’s just fair.

The budget resolution is the only legislative document that confronts Congress with the entirety of the federal budget. Grappling with the nation’s rapidly deteriorating fiscal situation should encourage lawmakers to put forth proposals to address the dual crisis of growing spending and debt.

The budget resolution is also the only way for Congress to invoke reconciliation, a powerful legislative tool that facilitates changes to taxes and entitlement spending by fast-tracking eligible bills and reducing the required Senate voting threshold to a simple-majority vote.

In fact, reconciliation is the most powerful tool in lawmakers’ arsenal to effect changes to entitlement programs that are on autopilot and driving the U.S. budget deeper into debt every year.

Appropriations bills matter, too. These annual spending bills provide taxpayer money for everything from the nation’s core constitutional priorities, like national defense, to rinky-dink grants like annual support for the Cowboy Poetry Gathering in Nevada (yes, taxpayers have been helping to fund this sort of fun for more than 30 years).

These bills require Congress to complete an important contemplative exercise each year: Which programs should get federal funding, and how much?

The alternative to this is autopilot spending that continues without question, regardless of available funding and shifting priorities. That’s no way to responsibly manage federal responsibilities.

But that’s exactly what many lawmakers would prefer to do, it seems. From advocating a biennial budget resolution to calling for automatic continuing resolutions, lawmakers seem more focused on avoiding work than on actually doing their jobs.

That’s irresponsible at best, and with deficits reaching trillion-dollar levels this year and growing from there, it’s a reckless abdication of Congress’ fiscal obligations to the American people.

We must revive the federal budget process as a critical tool to accomplish fiscal discipline.

The No Budget, No Pay Act introduced by Braun offers one promising path to incentivizing lawmakers to follow the law. At the very least, it might embarrass them when they have to go back to their district and explain why they failed to earn their paycheck this year.