The Real Risks of Marijuana Use 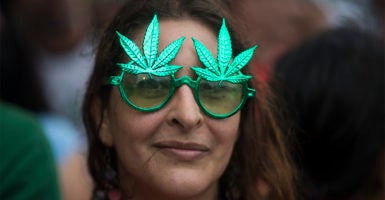 "The United States and Canada, which are the countries that have the most opioid use, also have by far the worst problem with ... cannabis," says author Alex Berenson. Pictured: A woman poses for a picture wearing marijuana leaf glasses as she marches during the 9th National Marijuana March in Buenos Aires, Argentina, on Nov. 22, 2018. (Photo: Mario De Fina/NurPhoto/Getty Images)

Ten states and Washington, D.C., have legalized the recreational use of marijuana. Twenty-two other states, along with U.S. territories Puerto Rico and Guam, allow marijuana to be used for medical purposes. Let’s examine some hidden issues about marijuana use.

Before we start, permit me to state my values about medical or recreational use of any drug. We each own ourselves. If we choose to take chances with substances that can ruin our health, lead to death, and otherwise destroy our own lives, that’s our right. But we do not have a right to harm others in the process of harming ourselves.

Alex Berenson is a graduate of Yale University, with degrees in history and economics. He delivered a speech last month at Hillsdale College’s Allan P. Kirby Jr. Center for Constitutional Studies and Citizenship in Washington, D.C., on the hidden dangers of marijuana use. He told his audience, “Almost everything that you think you know about the health effects of cannabis, almost everything that advocates and the media have told you for a generation, is wrong.”

The active ingredient in marijuana is tetrahydrocannabinol, or THC. Marijuana is most commonly prescribed for pain, but it’s rarely tested against other pain relief drugs, such as ibuprofen. Last July, a large four-year study of Australian patients with chronic pain showed that cannabis use was associated with greater pain over time.

Marijuana, like alcohol, is too weak as a painkiller for people with terminal cancer. They need opiates. Berenson said, “Even cannabis advocates, like Rob Kampia, who co-founded the Marijuana Policy Project … acknowledge that they have always viewed medical marijuana laws mostly as a way to protect recreational users.”

Marijuana legalization advocates sometimes argue that its use reduces opiate use. That is untrue. Berenson said, “The United States and Canada, which are the countries that have the most opioid use, also have by far the worst problem with … cannabis.”

Also, a paper in the American Journal of Psychiatry last year showed that people who used cannabis in 2001 were almost three times as likely to use opiates three years later, even after adjusting for other potential risks.

Something else that’s not given much attention is that cannabis today is much more potent than it was in the 1970s, when most marijuana contained less than 2 percent THC. Today marijuana routinely contains 20 to 25 percent THC, as a result of sophisticated farming and cloning techniques. As such, it produces a stronger and quicker high.

Berenson cited several studies and other findings showing a relationship between marijuana use and violence and crime. According to a 2007 paper in the Medical Journal of Australia on 88 felons who had committed homicide during psychotic episodes, almost two-thirds reported misusing cannabis.

A 2012 paper in the Journal of Interpersonal Violence examined a federal survey of more than 9,000 adolescents and found that marijuana use was associated with a doubling of domestic violence.

One of the problems with legalization of marijuana is that it gives social sanction to its use. A preferable strategy would be simple decriminalization, which does not imply social sanction.

Moreover, where there is no criminal activity associated with any drug usage, it should be treated as a medical problem, as opposed to a criminal problem.