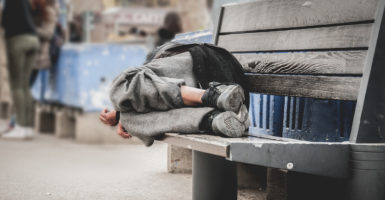 President Donald Trump was principled and politically astute to address, in his State of the Union, the horrors taking place now in Venezuela, and then to declare:

“Tonight we renew our resolve that America will never be a socialist country.”

Venezuela is indeed a poster child for what happens when a nation’s economic machinery falls under political control.

Over the last five years, per The Wall Street Journal, Venezuela’s economy shrank by 35 percent and poverty tripled from 48 to 87 percent.

Thirty-six percent of Venezuelans—51 percent of those between 15 and 29—say they would leave the country permanently if they could.

But if it is so clear that socialism is a formula for economic disaster, why does the idea still conjure up support?

In a Gallup poll of last year, 57 percent of Democrats, compared to 16 percent of Republicans, say they have a “positive view of socialism.”

Krugman mocks Trump, saying that “there is essentially no one in American political life who advocates such things” as government control of industry, as is the case in Venezuela.

When Democrats say “socialism,” says Krugman, they really mean “social democracy”—a market economy with a social safety net and use of the tax system as an equalizer.

The issue really isn’t how we technically define socialism. The issue is really the extent to which we are free.

What difference is it really if a firm is privately owned, but the government has vast latitude to regulate what it does? Or if a private firm pays me but government taxes away a large chunk of what I earn?

Venezuela is, of course, the extreme case. Total collapse as result of political despots taking over everything.

Every step in which economic freedom is cut back bears costs.

We see what is happening now, as the U.S. economy surges back to life as a result of cutting back regulation and taxes.

But our nation has not totally escaped the Venezuelan phenomenon.

America has entire communities in distress for the same reasons that Venezuela has fallen apart—political control over economic affairs. Life in our poor communities is in the grip of socialism, not capitalism.

There are 31 million people living in areas of high economic distress, now designated as “opportunity zones.” The average poverty rate in these zones is 28.7 percent. The average household income is 40 percent below the national average, and 36.5 percent of prime-age adults are not working. Fifty-six percent of these 31 million are nonwhite minorities.

The president’s new opportunity zone initiative, providing tax incentives to direct investment capital into these neighborhoods, aims to change realities with the same passion that the president spoke against socialism for the rest of the country in his State of the Union address.

How do countries wind up going in the wrong direction?

British playwright George Bernard Shaw captured it when he said, “A government that robs Peter to pay Paul can always depend on the support of Paul.”

Life has no shortcuts. Freedom, hard work, and personal responsibility are the one and only path to prosperity.