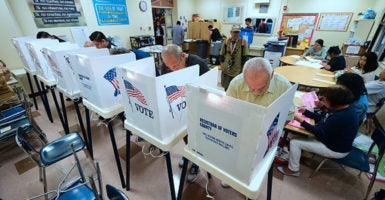 Yet another study has found that voter ID laws do not suppress voter turnout, but the study also asserted such laws have no clear effect on stopping voter fraud.

The study was compiled by two professors, Vincent Pons of Harvard University Business School and Enrico Cantoni of the economics department at the University of Bologna in Italy. It was issued by the National Bureau of Economic Research, based in Cambridge, Massachusetts.

“For all the heated debates around strict voter ID laws, our analysis of their effects obtains mostly null results,” the study says, adding:

First, the fears that strict ID requirements would disenfranchise disadvantaged populations have not materialized. Second, contrary to the argument used by the Supreme Court in the 2008 case Crawford v. Marion County to uphold the constitutionality of one of the early strict ID laws, we find no significant impact on fraud or public confidence in election integrity. This result weakens the case for adopting such laws in the first place.

In 2008, the Supreme Court upheld Indiana’s voter ID law in a 6-3 ruling in the case of Crawford v. Marion County Election Board.

Typically, Republican-controlled state legislatures have passed voter ID laws as a measure to prevent voter fraud, while Democratic lawmakers have alleged that such laws are voter suppression.

Past studies have drawn the same conclusion that voter ID laws do not deter voter turnout, but the new study is “totally wrong” to conclude ID laws don’t prevent voter fraud, said Hans von Spakovsky, manager of the Election Law Reform Initiative at The Heritage Foundation.

“How would you show it deters fraud if that’s something that didn’t happen because of voter ID laws?” von Spakovsky told The Daily Signal. “You have to look at convictions in absentee ballot fraud cases. In just four states, the voter ID laws apply the same to both in-person and absentee voting. So, it’s difficult to say.”

Currently, 17 states have photo ID laws at the polls, and 18 states have voter ID laws that do not require a photo, according to the National Conference of State Legislatures.

Of those states, the National Conference of State Legislatures classifies 10 states as “strict,” meaning if a voter is without acceptable voter ID under that state’s law, most vote on a provisional ballot. Three of those “strict” states do not require photo ID.

The study stated: “Measuring voter fraud represents a challenge, as federal and state agencies vary in the extent they collect and share information on it.”

The research cited The Heritage Foundation voter fraud database that includes 1,177 proven cases of voter fraud. Of those, 1,019 cases ended in criminal conviction.

The study also used data from News21, an investigative project funded by the Carnegie Corp. and the John S. and James L. Knight Foundation. Through research of government documents, the project found 2,068 cases of suspected voter fraud reported from 2000 through 2012.

The study does not claim to be the last word on the matter.

“Because states adopted strict ID laws only two to 12 years ago, our results should be interpreted with caution: we find negative participation effects neither in the first election after the adoption of the laws nor in following ones, but cannot rule out that such effects will arise in the future,” the study says.