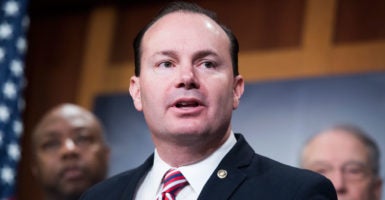 Democratic Hawaii Sen. Mazie Hirono denied ever instituting a religious test and scolded Lee for what she believed was censuring her.

“You can’t openly, publicly question a nominee about that nominee’s religious beliefs, about what he or she believes to be sinful conduct without subjecting that nominee to ridicule and simultaneously demeaning some of the fundamental tenets of our constitutional republic,” Lee said. “You can’t ask a nominee questions like those to which Neomi Rao was subjected just the other day and those that I’ve seen asked of some of our other nominees and then later ask the question ‘How did we get here?’”

Lee’s condemnation came two days after Democratic Sen. Cory Booker of New Jersey questioned Rao on her view of homosexuality and LGBTQ Americans during a Senate Judiciary Committee hearing to vet her for a seat on the D.C. Circuit Court of Appeals. Booker asked Rao if she considers gay relationships to be “immoral.”

“I can’t fathom a circumstance in which it’s ever appropriate for us to ask a nominee about his or her religious beliefs about whether x, y, or z is a sin,” Lee continued.

Referring to the line of questioning as “wildly inappropriate,” the Utah senator put forth a specific circumstance where one’s religion would come in conflict with their ability to faithfully execute their duties. However, it would require a narrow, specific type of question.

“I urge you to consider the fact that we should never expose someone to shame, ridicule, or scorn on the basis of their religious beliefs and I ask that we refrain from doing so in this committee,” Lee said. “We should never again ask someone what they regard as a sin or other particulars of their religious beliefs. It’s nobody’s darn business. It’s certainly not the business of this committee.”

“We are not in the business of censuring each other’s questions to nominees or falsely assigning motives that don’t exist,” Hirono responded. “There is no religious test for nominees on this committee and to suggest otherwise is, to quote my friend from Utah, ‘wildly inappropriate.’”

“The problem with asking a nominee about the particulars of his or her religious beliefs is that those questions inevitably expose those beliefs as somehow a qualifier or a disqualifier for public office,” Lee said. “That is flatly inconsistent with [the United States Constitution].”

The Hawaii senator further defended probing nominees on their religious beliefs in order to determine if it will “not enable them to be objective” and called it a “legitimate area of inquiry.”

“It is not that we all ask, ‘Do you think such and such is a sin, etc., etc.?’” Hirono continued before Lee confronted her with Booker’s question to Rao.