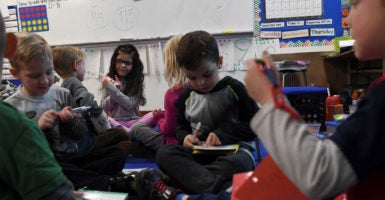 A federal voucher would violate the principles of federalism and would be open to manipulation by future administrations. (Photo: RJ Sangosti/MediaNews Group/The Denver Post via Getty Images)

Americans need more education choice, but just as importantly, we need to preserve the invaluable system of federalism that has been at the cornerstone of our republic.

During his State of the Union address, President Donald Trump called on Congress to “pass school choice for America’s children.”

Over in the pages of Education Next, Ira Stoll suggests a congressional effort may take the form of a nationwide federal tax credit scholarship program. Stoll points out that Sen. Ted Cruz, R-Texas, is planning to introduce “federal school choice legislation that would create a federal tax credit, a dollar for dollar credit, of every dollar contributed to a scholarship granting organization, [which would be] a credit on your federal taxes.”

Tax credit scholarships, which are smart state-level education policy, provide tax credits—sometimes dollar-for-dollar—to individuals and corporations that donate to scholarship granting organizations. Those organizations then provide a scholarship to an eligible student to attend a private school of choice.

The administration’s support of school choice is praiseworthy, but a federal tax credit scholarship program poses a threat to education choice in the states, and undermines the goal of a streamlined federal tax code.

Moreover, the federal government does not have the constitutional authority to create such a program, which would establish massive new federal spending and would likely subject private schools to future regulations from an administration and Congress less friendly to education choice.

Even if the proposal were to include strong prohibitions against federal meddling, it is impossible to prevent subsequent administrations or Congresses from attaching new regulations to the program.

The Founding Fathers designed a system of federalism that delegates many important decisions, including education, to the states. A broad-based federal tax credit scholarship program fundamentally goes in the wrong direction: It would expand, not shrink, federal intervention in K–12 education.

Americans were rightly frustrated by the federal government’s heavy-handed role in pushing Common Core national standards. Through a combination of federal inducements, President Barack Obama pushed states to adopt a policy his administration preferred—national standards and tests—which ultimately led to a major nationwide backlash against what had previously been a state-led initiative.

Education choice is good policy. But using the federal government to push it risks sparking a similar backlash. A national tax credit scholarship program risks upsetting the hard-won local coalitions that have emerged from the bottom up over the course of decades.

Another federal tax credit would also be bad tax policy. Each year, Congress uses the tax code to hand out billions of dollars in subsidies to politically connected interests, picking winners and losers and distorting free markets. A federal tax credit scholarship program would add new complexity to the tax code, impede future efforts to reform the tax code, and undermine other important federal priorities, such as deficit reduction.

Instead of establishing a new federal tax credit scholarship program, the administration and Congress should work together to advance education choice through use of their bully pulpits, and by creating education choice in those areas in which it has a constitutional warrant: for children from military families, Native American students on tribal lands, and students living in Washington, D.C.

Such a federal focus would pay dividends for the school choice movement, by leaving education choice programs to the states, which have been the catalyst for the impressive growth in school choice over the past two decades.