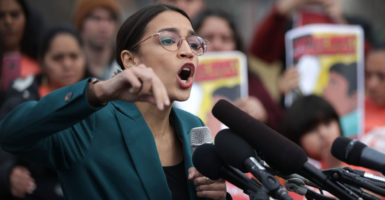 Here’s the most important fact about the Green New Deal: It wouldn’t work.

Ultimately, fully implementing the Green New Deal would have no meaningful impact on global temperatures.

And make no mistake: If implemented, the Green New Deal would bring huge changes to our country. According to an FAQ put out by Ocasio-Cortez’s office, this new deal is “a 10-year plan to mobilize every aspect of American society at a scale not seen since World War 2 to achieve net-zero greenhouse gas emissions.”

The plan additionally asks Americans to “upgrade or replace every building in U.S. for state-of-the-art energy efficiency” and to “build out highspeed rail at a scale where air travel stops becoming necessary.”

But here’s the key thing: Even if Americans were on board with this radical change in behavior and lifestyle, it wouldn’t change our climate.

In fact, the U.S. could cut its carbon dioxide emissions 100 percent and it would not make a difference in abating global warming.

Using the same climate sensitivity (the warming effect of a doubling of carbon dioxide emissions) as the U.N.’s Intergovernmental Panel on Climate Change assumes in its modeling, the world would be only 0.137 degree Celsius cooler by 2100. Even if we assumed every other industrialized country would be equally on board, this would merely avert warming by 0.278 degree Celsius by the turn of the century.

One of the biggest sources of carbon dioxide emissions is developing countries.

But while one of the priorities of the Green New Deal is to make the U.S. a lead exporter in green technologies, assuming developing countries will forgo cheap, abundant carbon dioxide-emitting energy for more expensive intermittent sources is pure fantasy.

After all, affordable, reliable, and widely available energy is essential to lifting people out of poverty and improving the life, health, and comfort of people trying to reach a better standard of living.

But not only would the Green New Deal be ineffective, it would also almost certainly impose steep costs on Americans, via increased energy bills.

The resolution calls for deriving 100 percent of America’s electricity from “clean, renewable, and zero-emission” energy sources—a steep increase from the 63 percent of electricity that came from carbon dioxide-emitting conventional fuels in 2017. Nuclear power was responsible for another 20 percent. But, according to the FAQ sheet, “The Green New Deal makes new fossil fuel infrastructure or nuclear plants unnecessary. This is a massive mobilization of all our resources into renewable energies.”

The proposal also calls for eliminating greenhouse gas emissions from transportation and other infrastructure as much as technologically feasible. Yet, as recently as 2017, petroleum accounted for 92 percent of America’s transportation fuel.

To achieve these targets, the resolution proposes a massive government spending program in addition to carbon dioxide taxes, subsidies, and regulation. How are Americans going to pay for it?

Don’t worry, the FAQ answers that one: “We will finance the investments for the Green New Deal the same way we paid for the original New Deal, World War II, the bank bailouts, tax cuts for the rich, and decades of war—with public money appropriated by Congress. Further, government can take an equity stake in Green New Deal projects so the public gets a return on its investment.”

Credibly estimating the cost of the Green New Deal for American taxpayers, households, and businesses is exceedingly difficult. Even projecting the cost of switching to 100 percent renewable power for electricity relies on a set of largely unknowable assumptions. How companies would make large-scale investments to meet the mandate and how intermittent power sources would receive backup power is mostly a guessing game.

In effect, the result would be households potentially paying hundreds of dollars more per month in their electricity bill.

Green New Deal Could Lead to Millions of Lost Jobs

Even more concerning, the direct impact from higher energy costs is just a small part of the story. Energy is a necessary input for nearly all of the goods and services consumers buy. Consequently, Americans will pay more for food, health care, education, clothes, and every other good or service that requires energy to make and transport.

In fact, Heritage Foundation economists used the Heritage Energy Model, a derivative of the Energy Information Administration’s National Energy Modeling System, to model the economic impacts of a carbon tax, which Green New Deal advocates admit would only be one tiny fraction of the entire plan.

Each carbon tax analysis found an average shortfall of hundreds of thousands of jobs with peak year unemployment reaching over 1 million jobs lost and half the job losses coming in energy-intensive manufacturing industries.

Over a 20-year period, the total income loss would be tens of thousands of dollars and the aggregate gross domestic product loss would be over $2.5 trillion. If policymakers spent, taxed, and regulated to achieve net-zero greenhouse gas emissions for America’s transportation, agricultural, and industrial sectors, the costs would be several orders of magnitude higher.

Importantly, Americans have little appetite to pay such costs. In fact, a recent Associated Press poll found that 68 percent of Americans oppose paying an additional $10 per month to fight climate change. The protests in France are quite indicative of how people feel about costly climate policies.

The Broad Scope of the Green New Deal

Furthermore, the Green New Deal would affect a lot more than energy. Guaranteeing high quality health care, education, and a job with a family-sustaining wage are all part of this new deal.

And don’t forget the egregious amount of spending that would result in energy cronyism and corporate welfare on steroids—essentially, taxpayer dollars from hardworking families going to line the pockets of companies like Tesla and Solyndra.

Don’t worry, though. These Green New Deal proponents do admit they can’t quite get everything done in 10 years. According to the FAQ sheet:

In the end, this massive government-planned, taxpayer-funded plan is a raw deal for Americans—and a totally ineffective climate policy.