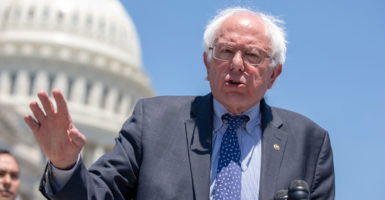 “How can a president of the United States give a State of the Union speech and not mention—not one word—about climate change?" Sen. Bernie Sanders, I-Vt., asks. (Photo: Alex Edelman/Stringer/Getty Images)

Independent Vermont Sen. Bernie Sanders accused President Donald Trump of omitting one “of the most important issues facing our country and the entire world” from the Tuesday State of the Union: climate change.

The Vermont senator and self-proclaimed socialist delivered his own response to Trump’s address to the nation after failed gubernatorial candidate Stacey Abrams delivered the Democratic Party’s response.

My response to President Trump’s State of the Union address: https://t.co/sl1OEu6NR8

“Further, the scientists tell us that we have a very short 12 years, not a lot of time, in order to transform our energy system away from fossil fuels and into energy efficiency and sustainable energy,” Sanders continued. “Somehow or another, Donald Trump just forgot to talk about that.”

Trump touted his energy agenda and achievements during his speech.

“We have unleashed a revolution in American energy—the United States is now the No. 1 producer of oil and natural gas in the world,” Trump said. “And now, for the first time in 65 years, we are a net exporter of energy.”

Climate change alarmists such as Sanders believe the world has roughly a decade to cut fossil fuel use entirely and stave off the most negative effects of climate change. Many Democrats in the crowd Tuesday night refused to applaud after Trump touted his administration’s record on energy development.