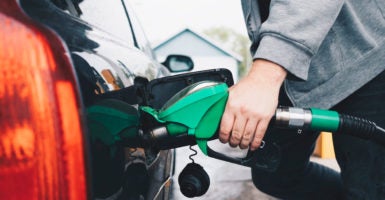 By one estimate, an alternative fuel credit provides a $555 million-a-year subsidy to oil and gas companies for butane, a naturally occurring byproduct of oil refining, which, “even without the added tax incentive … has typically been added to gasoline to reduce vapor pressure,” as Doug Sword explains. (Photo: Maskot/Getty Images)

Every few years, Congress renews a list of expiring tax subsidies called “tax extenders” at the behest of powerful industry lobbyists. Instead of returning to business as usual in the swamp, Congress should focus on fixing a few mistakes in the 2017 Tax Cuts and Jobs Act that would benefit all Americans.

The 2017 tax reform package was supposed to end the practice of implementing temporary extenders, but wealthy corporate interests haven’t gone quietly into the night.

There are about 26 narrowly tailored special-interest tax privileges that expired at the end of 2017. At the end of 2018, a bipartisan group of policy organizations recommended, “Congress should not insert these policies back into the tax code now or in the future.”

Each extender grants an economic privilege, tailored to some particular group or business interest. By picking winners and losers, these corrupt policies reduce opportunity for individuals and businesses that Congress does not shower with special favors.

One tax credit program gives a subsidy of over a dollar per gallon for certain biofuel producers. The credit is so complicated that three government agencies—the Environmental Protection Agency, the Internal Revenue Service, and the Department of Justice—have been unable to properly enforce the provision. In fact, the credit resulted in several fraud cases, including one group of executives who plead guilty to a $64 million fraud scheme using the tax credit.

Another credit for an alternative fuel is just as worrisome. By one estimate, the credit provides a $555 million-a-year subsidy to oil and gas companies for butane, a naturally occurring byproduct of oil refining, which, “even without the added tax incentive … has typically been added to gasoline to reduce vapor pressure,” as Doug Sword explains. A subsidy for something that would have happened anyway is a windfall profit, not an incentive to change business behavior.

Temporary reauthorizations mask the true cost of what are effectively permanent policy features. They provide an opening for politicians to request patronage from special interests on a semiannual basis, and create economic uncertainty. If extended permanently, the 26 expired provisions would cost about $92 billion over 10 years.

Furthermore, most of the credits have already expired, so retroactively extending them would do nothing but transfer taxpayer funds to the hands of corporate lobbyists. Last year’s business decisions have already been made. Retroactively reviving tax credits that expired in 2017 cannot change business behavior that has already taken place. The extenders are a waste of taxpayer money.

So what can Congress do?

Congress can focus on building a consensus to make the individual tax cuts permanent, something that even has support among a few Democrats. Smaller reforms in the Tax Cuts and Jobs Act also need attention.

For example, one of the more important problems to fix is the “retail glitch,” which unintentionally denies the benefit of business expensing to building improvements, called qualified improvement property. The 2017 law allows businesses to immediately deduct the cost of most new investments. This makes expanding or modernizing a business a bit easier, raises wages, and grows the economy.

Fixing the retail glitch would make sure grocery stores and restaurants can access the benefit as Congress intended. This change doesn’t even have a new budgetary impact as the revenue estimates were already included in the Tax Cuts and Jobs Act.

Rather than reintroduce expired tax subsidies at the cost of $90 billion, Congress should work on improving the tax code for all Americans.