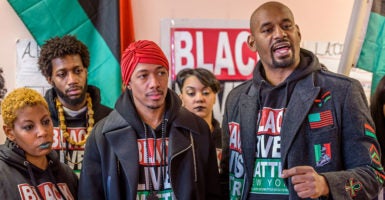 NEW YORK—Hawk Newsome says he often makes it a point to meet people where he grew up. So on a cold day not long ago, I made my way to Papa Juan’s Cigar Room in the South Bronx to see the man who led Black Lives Matter of Greater New York.

“I appreciate you having the courage to come to the South Bronx,” he tells me as we sit down to chat. “I make it a point to bring people to the Bronx. So, they could one, see the folks that I’m a part of, see what we represent. Two, just to see how scared they get.”

It really wasn’t scary, but it certainly was outside of my comfort zone.

Describing himself as a devout Christian and family man, Newsome shared stories with me about his youth and why he was motivated to become a civil rights activist and organize Black Lives Matter of Greater New York. Then, in September 2017, he made headlines when he took the stage at a pro-Trump rally in Washington, D.C.—and won over the crowd.

Today, he’s focused on studying for the bar exam and starting a new organization with the goal of finding common ground.

Our interview runs about 40 minutes and is featured on The Daily Signal Podcast.

Conservatives won’t agree with Newsome on many issues, but it’s an opportunity to hear a different perspective. Leave a comment and let us know.