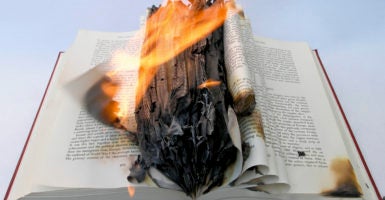 “The narrative and history of slavery in the United States is not something I can, would, or intended to write, but I recognize that I am not writing in merely my own cultural context," author Amelie Wen Zhao writes in her apologetic announcement to postpone her first novel after accusations of racist undertones. (Photo: Jweise/Getty Images)

Young adult and fantasy author Amelie Wen Zhao announced Wednesday her decision to delay the publication of her highly anticipated first novel “Blood Heir” after an online barrage of social justice voices accused her work of being racist.

“Blood Heir” is a fantasy adaptation of the story surrounding the legendary Russian Princess Anastasia, who was framed for killing her father and allegedly goes into hiding. Critics accused Zhao’s writing of having racist undertones because of the story’s reported description as showing a world where “oppression is blind to skin color, and good and evil exist in shades of gray.”

Among the sharpest critics was L.L. McKinney, a fellow fantasy author and woman of color, who reportedly called the book “anti-black,” saying that oppression could never be colorblind.

Others chastised Zhao, a Chinese immigrant, for writing about, as some interpreted it, the oppression and slavery faced by African-Americans.

“I emigrated from China when I was 18,” Zhoa wrote in her statement to postpone publication. “Drawing on my own multicultural upbringing and the complex history of my heritage that has incidences of bias and oppression, I wrote [“Blood Heir”] from my immediate cultural perspective.”

Zhao continued, “The issues around Affinite indenturement in the story represent a specific critique of the epidemic of indentured labor and human trafficking prevalent in many industries across Asia, including in my home country.”

Zhao’s GoodReads page featured negative reviews, presumably from those who were familiar with the controversy.

“[One hundred and fifteen] reviews and how is nobody mentioning the anti-blackness and blatant bigotry in this book?” one commenter named “Sarah” wrote. “This book is about slavery, a false oppression narrative that equates having legitimately dangerous magical powers that kill people with being an oppressed minority, like a person of color. This whole story is absolutely repulsive.”

Ultimately, Zhao’s explanation of her novel’s cultural context was not in defense of her book, for which she received a $500,000 advance. Zhao made clear her statement was an apology.

“The narrative and history of slavery in the United States is not something I can, would, or intended to write, but I recognize that I am not writing in merely my own cultural context,” Zhao wrote. “I am so sorry for the pain this has caused.”

“I don’t wish to clarify, defend, or have anyone defend me,” Zhao emphasized. “This is not that; this is an apology.”

After Zhao announced her decision, those skeptical of the rebukes against her book took to Twitter to air their disappointment with the writer’s decision to capitulate and censor herself.

“Blood Heir” was originally scheduled for release in June. Whether the novel will be published in the future is uncertain, though her publishers at Random House Children’s Books publicly said they “respect Amelie’s decision, and look forward to continuing our publishing relationship with her.”

This article has been corrected to reflect that ““oppression is blind to skin color, and good and evil exist in shades of gray,” was a description of “Blood Heir,” not a quote from L.L. McKinney.