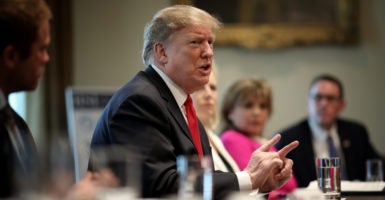 President Donald Trump talks about human trafficking Friday during a meeting in the Cabinet Room of the White House. Federal judges at the state level have halted Trump's policies through nationwide injunction 30 times, more than any other president. (Photo: Win McNamee/Getty Images)

Federal district judges who preside over a portion of a single state have been able to block President Donald Trump’s actions 30 times through nationwide injunctions—far more than any other administration in history, according to the Justice Department.

The trend has prompted the Trump administration’s Justice Department to seek an end to nationwide injunctions, following a similar argument made by the Obama administration.

“The core problem, in other words, is not so much the geographic scope of the injunction, but its reach far beyond the confines of the case or controversy before the court,” Beth Williams, assistant attorney general for the Justice Department’s Office of Legal Policy, said Monday at a forum at The Heritage Foundation.

“Injunctive relief should be no broader than necessary to provide complete relief to the party,” Williams said.

Judges on the lower federal courts issued injunctions against Trump administration policies providing extreme vetting of immigrants from countries deemed to be failed states; denying funding to sanctuary cities that won’t cooperate with federal law enforcement on immigration law; and tightening the asylum process for illegal immigrants, among other issues.

Lower courts issued these injunctions far in excess of previous administrations, according to Justice Department numbers.

Many of the lawsuits were filed in district courts that put the cases on track to be heard in the liberal U.S. Court of Appeals for the 9th Circuit, because, Williams added, such rulings “invites unvarnished judge-shopping.”

Before 1963, no court had issued national injunctions, Williams said. Such rulings didn’t become remotely routine until the 1980s.

Even then, the average annual number of nationwide injunctions against the administrations of Ronald Reagan, Bill Clinton, and George W. Bush was 1.5. That increased to 2.5 under Barack Obama.

That number now stands at 30, Williams said, matching the total for the first 42 of the 45 presidents so far in American history.

The Obama administration contended with federal district judges issuing injunctions on executive actions, including one shielding certain illegal immigrants from deportation. The Obama Justice Department had argued: “A trial court abuses its discretion by fashioning an injunction, which is overly broad.”

House Republicans last year proposed legislation called the Injunctive Authority Clarification Act, which would put limits on nationwide injunctions—in most cases limiting a district court’s ruling to that particular district or the larger federal circuit that includes it.

Separately, during oral arguments in a 2018 case, Justice Neil Gorsuch talked about the “troubling rise of [the] nationwide injunction, cosmic injunction … not limited to relief for the parties at issue or even a class action.”

Justice Samuel Alito wrote in the 2016 redistricting decision Cooper v. Harris that when federal district courts impose national injunctions, it “invites the losers to seek to obtain in court what they could not achieve in the political arena.”

The high court based its determination in the Mendoza case on the national reach of federal government policy, which should not be fully addressed at a more regional or local level as tried by a district court, he noted.

However, Alan Trammell, an assistant professor at the University of Arkansas School of Law, argued that “judicial power has never been defined so fully in terms of dispute resolution.”

He referred to the first extreme vetting policy, which the Trump administration later amended.

“The first travel ban was blatantly unconstitutional and is an example [of] when a nationwide injunction is justifiable,” Trammell said. “The alternative was for every single green card holder to file a challenge.”

Nationwide injunctions allow one litigant to hold up a policy across the country, regardless of what other courts rule, said Michael Morley, assistant professor at Florida State University College of Law.

“All it takes is a single litigant anywhere in the nation to win one time, and then they are able to obtain effectively nationwide relief enforcing the rights of all people throughout the nation,” Morley said. “So, you have a fundamental asymmetry where the government has to win everywhere, whereas to have a policy or a regulation or an order invalidated, a challenger only has to win once.”