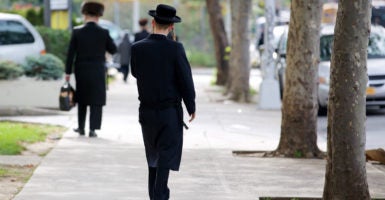 Jewish therapist Dovid Schwartz is suing the city of New York for infringing on his free speech and religious liberty when it comes to his work with LGBT patients. (Photo: Alexander Spatari/Getty Images)

Licensed psychotherapist Dr. Dovid Schwartz is suing the city of New York for infringing on his and his patients’ religious faith and freedom of speech by way of a new ordinance imposing limits on counseling services to LGBT patients that the city discredits.

Schwartz is a member of the Chabad Lubavitch Orthodox Jewish Community in Brooklyn. The New York City Council’s “Counseling Censorship Law” restricts the counseling of an adult patient to change their same-sex attractions or discourage a person to choose the gender identity that doesn’t match his or her body.

More specifically, the ordinance penalizes the illegal exchange of such services with hefty fees. Fines for the first violation start at $1,000, $5,000 for the second, and $10,000 for each following violation. Conversely, therapists who counsel patients to embrace the gender identity opposite their physical body are not subject to such fines.

“Of course the state has authority to regulate medicine to ensure safety, but that’s not what this law is about,” said Ryan T. Anderson, The Heritage Foundation’s William E. Simon senior research fellow in American principles & public policy. “This law imposes an ideological ban because the state disagrees with the viewpoint of doctors like Dovid Schwartz. It’s not targeted at harmful practices, but at particular values.”

Schwartz v. City of New York, filed at the federal level on Jan. 23 by the Christian legal group Alliance Defending Freedom, involves Schwartz’s requests to be protected from paying the fees or censoring his conversations with LGBT patients, who are largely from his religious community and wish to abide by their orthodox faith.

“Nearly all of Dr. Schwartz’s patients share his faith, and they value his counsel about issues of sexuality and family in part because his perspective is grounded in their shared Jewish faith and respect for Torah teachings,” said Jeana Hallock, the Alliance Defending Freedom attorney representing Schwartz.

Schwartz says the only techniques he uses with his patients are simply listening and talking, but the law claims to forbid even that.

Alliance Defending Freedom senior counsel Roger Brooks commented on the matter, asserting Americans, whether secular or religious, deserve the right to have private conversations that are free from censorship laws imposed by the government.

“The city council’s regulation is unprecedented and threatens to stand between Dr. Schwartz’s patients and the lives they choose to pursue,” Brooks said. “As the U.S. Supreme Court noted in its 2018 NIFLA decision, ‘[T]he people lose when the government is the one dictating which ideas should prevail.’”