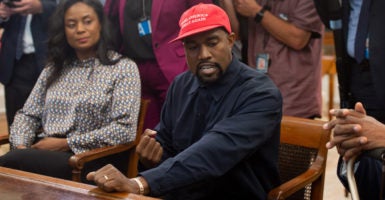 Editor’s note: A California restaurateur tweeted this week that he wouldn’t serve anyone who came to his restaurant, Wursthall in San Mateo, if they wore a “Make America Great Again” hat. “It hasn’t happened yet, but if you come to my restaurant wearing a MAGA cap, you aren’t getting served, same as if you come in wearing a swastika, white hood, or any other symbol of intolerance and hate,”  tweeted J. Kenji López-Alt, per the San Francisco Chronicle.

He added, “Wursthall will continue, as it always has, to serve all customer regardless of race, color, religion, sex, national origin, sexual preference, gender orientation, disability, or political opinion—so long as they leave hate, anger, and violence outside of the doors of our restaurant.”

What’s not clear: whether that means someone wearing a “Make America Great Again” hat would be served at Wursthall or not.

We’re reprinting this article, originally published Jan. 22, in light of this news.

By now much of America has seen the images of teenage boys in “Make America Great Again” hats milling near a chanting Native American elder.

Initially, the boys were condemned by the left and the right. More video of the incident, however, revealed the boys were not the instigators.

After that hasty condemnation, some high-profile figures actually had the grace to apologize for their rush to judgment about the boys from Covington Catholic High School in Kentucky and their encounter Friday with Nathan Phillips, 64, on the National Mall.

When actress Jamie Lee Curtis issued an olive branch, hoping for something as noncontroversial as finding “common ground,” some of her left-leaning followers went nuts.

“DID YOU MISS THE MAGA HATS?” Brownworth asked.

When it became clear that the white, Trump-supporting teenagers could not be blamed for the incident on the Mall, the left tried to heap some level of responsibility on the boys for wearing those MAGA hats.

Throughout the Twitterverse, otherwise intelligent adults are pointing to the hats as confirmation that the boys 1) were asking for trouble and 2) are racists.

We do believe that #MAGA and the MAGA hats represent something. Wearing the MAGA hat is not a neutral act. But the left’s “Resist” movement once again is completely missing the point.

It’s not a symbol of racism. It’s actually the right’s symbol of resistance to leftist intolerance.

A perfect example of the left’s missing the mark is actress and activist Alyssa Milano, who tweeted: “The red MAGA hat is the new white hood.”

When we counsel clients on effective communication, we offer a few key tips on our “Never Do This List.” On the top of the list is “Never compare anyone to the Ku Klux Klan.” Unless, of course, they are in fact the Ku Klux Klan.

Milano and many others are making the “basket of deplorables” error.

The people who support President Donald Trump and the #MAGA movement largely support an agenda that puts America first. They are people who champion free and fair markets, religious liberty, and tax cuts.

This is not double talk or dog-whistling for anything other than free and fair markets, religious liberty, and tax cuts.

In October, we had the opportunity to meet with and interview black American college students who were in Washington for a Turning Point USA conference. It was refreshing to see young black students celebrating conservative principles.

The one interview that stands out is with a young woman from Denver. When we asked her, “What does it mean to be bold?” she replied without hesitation: “To be bold to me is to wear this hat.” And she pointed to her bright red MAGA hat.

She continued: “To be conservative and to express my views. I mean, that is one of the boldest things that any of us could possibly do, especially in this particular time.”

That young African-American woman, and the young teens from Kentucky, understand that MAGA hats make a statement.

The left missed the statement in 2016. And to the peril of their hopes for 2020, they are missing it once again.