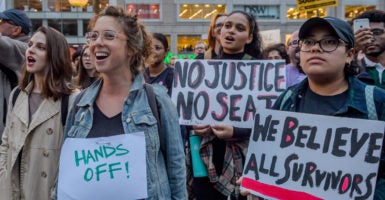 The House’s Democratic majority voted Wednesday to give pay raises to federal employees who were disciplined for sexual misconduct.

Democrats blocked a Republican measure that would have prevented any federal employee disciplined for sexual harassment or other sexual misconduct from getting a salary increase.

House Republicans pushed the measure amid the “Me Too” movement of women who have been sexually assaulted or harassed, which has pointed to several male members of Congress for inappropriate behavior toward female employees.

The GOP proposal would have blocked the 2.6 percent annual pay increase, which traditionally goes to all federal employees, for any employee who was disciplined for sexual misconduct but remains on the job.

The proposal said: “During calendar year 2019, no increase in pay as authorized under this Act may be provided to any Federal employee who has been disciplined for sexual misconduct under chapter 75 of title 5, United States Code, or any other provision of law.”

“Today, House Democrats voted to reward individuals who have engaged in sexual misconduct with a pay raise,” Johnson said in a prepared statement.

Although 17 Democrats crossed party lines, the measure to block some raises failed by a 216-206 vote. The bill, without the GOP amendment, now goes to the Senate.

“Thanks to their votes,” Johnson said of the other House Democrats, “those who have been disciplined for these behaviors will be given the same, across-the-board pay increase that their victims receive.”

By any objective measure, this is just wrong.

Unfortunately, this legislation passed the House for no other reason than that the majority party could not stomach a commonsense solution offered by the minority.

We are appalled that this is what ‘governing’ has come to in our country. The American people deserve much better than this.

The final House vote to increase pay for civilian workers was 259-161, including 29 Republicans and all Democrats.