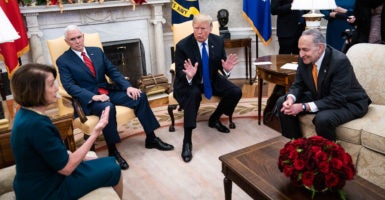 Though control of the House has switched to Democrats, there is still a chance—and, really, an obligation—for the House and Senate to work together and approve a responsible budget proposal. Pictured: President Donald Trump debates with then-House Minority Leader Nancy Pelosi, D-Calif., and Senate Minority Leader Chuck Schumer, D-N.Y., right, as Vice President Mike Pence listens during a meeting in the Oval Office of White House on Dec. 11, 2018. (Photo: Jabin Botsford/The Washington Post via Getty Images)

America’s spending addiction is continuing to spiral down an unsustainable path, threatening to hurt economic opportunity and financial security for the most vulnerable Americans, especially minorities, low-wage workers, and women—all of whom benefit from the current strong economy.

The short-term projections are slightly more optimistic than last year’s, with the CBO crediting better-than-expected revenue growth created by the Tax Cuts and Jobs Act of 2017.

The CBO projections assume that the Budget Control Act’s discretionary spending caps will go back into effect in fiscal years 2020 and 2021, which would mean a $71 billion cut for defense next year.

The caps have been amended six of the eight years of the Budget Control Act’s existence. The CBO thus presents an alternative fiscal scenario that estimates that if the caps were increased again, 10-year spending would be $1.8 trillion higher than its current baseline projection.

Discretionary spending projections for fiscal year 2019 have also decreased by $77 billion, mainly because the CBO assumes that emergency designated spending will be much lower in fiscal 2019 and beyond after historically high levels last year. Actual emergency costs are unpredictable and will be determined by Congress if necessary.

Under the more optimistic baseline assumptions, the CBO projects that in fiscal 2019, the federal deficit will rise to $897 billion, crossing the trillion-dollar level by fiscal 2022 for the first time since fiscal 2012.

Debt projections aren’t looking much rosier, either. The CBO estimates that debt held by the public will rise to 78.3 percent of gross domestic product by the end of fiscal 2019 and increase steadily over the next decade, reaching 92.7 percent of GDP by fiscal 2029, the highest level since 1947.

The CBO warns that this level of debt would drive up interest rates and increase inflation, affecting almost all Americans and especially those on fixed incomes, eroding their purchasing power and the value of their savings.

Such high and growing levels of debt threaten to undermine economic growth, which will hurt all Americans, but which will have the worst effects on more vulnerable populations that are less able to weather a recession and a possible prolonged period of stagnation that a fiscal crisis could bring about.

Democrats are quick to blame the Republican tax cuts for exploding deficits, but CBO projections show the culprit lies elsewhere.

Since the passage of the Tax Cuts and Jobs Act, the American economy has seen significant economic growth, and the lowest unemployment rate in decades. That has fueled a boom in jobs and wages that’s been particularly powerful in creating economic opportunities for low-wage workers, minorities, and women.

The biggest weaknesses of the 2017 tax cuts is that Congress made them temporary and didn’t pair them with spending cuts. Tax cuts and spending reforms have to go hand-in-hand; otherwise, the economy’s true growth potential is compromised by rising deficits.

Social Security, Medicare, Medicaid, and interest on the national debt are driving all of the federal government’s long-run spending growth. The CBO projects that by the end of the next decade, federal health care spending, Social Security, and interest will consume 83 percent of all revenues, as spending on interest on the national debt is projected to climb by a staggering 186 percent over the next 10 years.

The CBO’s outlook also warns that recent changes to trade policy could have a negative impact on the economy. The CBO projects that new tariffs imposed by the U.S. and its trade partners will lower the nation’s real GDP by 0.1 percent by 2022. It also estimates the tariffs will reduce personal consumption and private investment over the next three years.

Even though the CBO’s latest projections are grim, all hope is not lost. Congress and the president have several upcoming opportunities where they can work together and recommit to fiscal responsibility.

First is what happens next with the Budget Control Act spending caps. It became law in 2011 and capped defense and nondefense discretionary spending through 2021 and provided for automatic mandatory spending cuts to nonexempt programs.

Since the passage of the Budget Control Act, the caps have been modified six of eight years, with the latest budget deal increasing spending by more than twice the previous two combined.

The cliff created by the last budget deal means there almost certainly will be another push by Congress to modify the caps.

Fiscal restraints are more important now than ever. Legislators will be tempted to increase the Budget Control Act caps again in 2020, to avoid a $71 billion cut in defense spending, as the president has made it his priority to strengthen military readiness.

Congress should work within the Budget Control Act’s overall spending cap to prioritize defense over nondefense spending. Any increase in the overall discretionary spending level must be offset with other mandatory spending cuts.

America can no longer afford blowing up the deficit for political expediency.

Even if Congress abides by the Budget Control Act caps, that will not suffice to avert the long-term budget crisis. To do that, Congress should consider more effective fiscal restraints, such as a cap on all noninterest spending. That would widen the opportunities for spending reforms and focus Congress on the primary drivers of the national debt.

Another opportunity to get spending back under control is the upcoming budget cycle. President Donald Trump’s fiscal 2018 budget balanced in less than 10 years. While his fiscal 2019 budget did not balance, the administration has continued to show a strong commitment to reducing spending and the size of the federal bureaucracy.

The president should take a strong stance toward fiscal responsibility in his budget.

The House has passed balanced budget proposals through the committee process every year since fiscal 2012. Though control of the House has switched to Democrats, there is still a chance—and, really, an obligation—for the House and Senate to work together and approve a responsible budget proposal.

Passing a budget would unlock the reconciliation process, the most powerful tool Congress has to enact major spending reforms.

Finally, Trump should push for another rescissions package. Rescissions allow the president and Congress to take back funding that has already been appropriated by law but that has not yet been obligated. That would help reduce government waste and take a potential slush fund for new spending off the table for future offsets.

While the CBO outlook paints a disheartening view of the country’s budget future, they are only projections—meaning that there’s still time to change course. Time is running out, however.

Congress must get serious now and pursue meaningful reforms to get the budget back on track. American’s future depends on them.