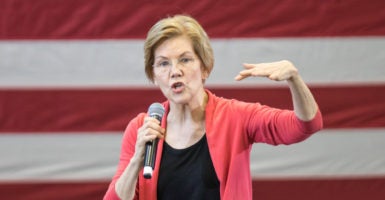 A radical new tax proposal would hurt the poorest and more vulnerable working-class Americans, and fuel the ever-increasing presence of Washington in our daily lives.

The tax would be a fundamental departure from our current tax code, adding an entirely new tax system on top of the 70,000 pages of existing tax law.

A wealth tax would hurt every American.

Taxes on wealth are poorly designed taxes on investment. Investment is the lifeblood of our economy. It’s needed to add new jobs, update aging factories, and develop new technologies.

The little guy benefits the most from new technologies, processes, and business models. It’s this type of innovation and investment that allows us to buy cheaper clothes, better computers at lower prices, and fresher food at our grocery stores.

Under a wealth tax, the world’s wealthiest investors—many of whom live in the U.S.—would shift their businesses elsewhere, would employ citizens of other countries, and would raise wages in the U.S. more slowly.

The tax would diminish the attractiveness of new breakthrough technologies and squander the even more important peripheral investments for incremental change.

America’s success as the leading economy in the world is the result of entrepreneurs taking risks on new products, failing, and trying again. It’s the big payoff that leads them through failure to success.

Increasing our standard of living is dependent on the successes of Bill Gates improving computers for us to use for work and pleasure, of Jeff Bezos lowering prices on everyday products that arrive right at our doorstep, and of Henry Ford perfecting the assembly line, which ultimately made cars affordable to allow American families to travel to jobs, to visit family, and to go on vacation.

Our public policies telegraph a message about our culture, our institutions, and what we value. A wealth tax says: “Don’t get too successful here. We want only middling ideas. If you have a really good idea, certainly don’t sell it to the rest of the world or we’ll hit you with a penalty.”

Those penalties don’t necessarily stunt the rich. They hurt all of us who miss out on cheaper deliveries, better computers, and more affordable cars.

Rather than investing in the next Amazon or the next pharmaceutical breakthrough, those who are already wealthy will spend their time avoiding the tax.

In the high-tax Scandinavian countries, the superwealthy avoid about 25 percent of their taxes. This is one reason why high taxes don’t necessarily bring in more revenue and fail to reduce inequality.

Instead, they direct resources away from investment and toward expensive lawyers and accountants to help skirt the tax.

Even high-tax European counties have steadily moved away from taxes on wealth over the past few decades.

A study by the Organization for Economic Cooperation and Development found that past attempts to tax wealth “frequently failed to meet their redistributive goals” and encountered significant administrative problems.

Warren should learn from the failures of other countries.

Her proposal would charge a 2 percent annual tax on Americans with more than $50 million in net worth and a 3 percent rate on net worth of more than $1 billion.

To some, this may sound like a small fee to pay, but it’s much more than that.

The process would be intrusive, requiring bureaucrats to place arbitrary values on medium-sized family-owned businesses, for example.

New taxes, however small, don’t stay small for long. In 1913, the income tax started as simply a small tax on a few of the richest Americans. Today, it reaches most Americans. Once new taxes are put in place, they tend to grow over time, because government is always looking for new sources of revenue.

Wealth taxes are a solution to a problem that doesn’t exist. The wealthy are not getting rich at the expense of everyone else.

Average American incomes have risen steadily since the post-World War II period, and living standards have increased along with them. Sure, there have been ups and downs, but Americans, including most low-income and low-skilled workers, are doing better today than they ever have.

A tax on wealth would undermine this progress.

Less investment and fewer new ideas will result in a less prosperous country and lower wages for average Americans.