How States Look to Resist ‘Overreach’ by Federal Bureaucrats 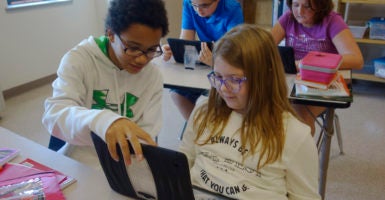 State governments have surrendered too much authority to the federal bureaucracy in education and other programs, some state lawmakers argue. Pictured: Sixth-graders use iPads in a classroom in Wellsville, New York. (Photo: Education Images/UIG/Getty Images)

Parents from Indiana to South Carolina who expect to have a voice in what their children are taught in public schools find that more difficult, state lawmakers and policy analysts say, because the federal government has overstepped constitutional boundaries and interjected itself in state and local affairs.

Proponents of legislation aimed at reforming the federal grant-making process cite this example to drive home their concerns that state governments have surrendered too much authority to the federal bureaucracy.

“The federal government has set the tone as to what education will look like in America and it’s different from what parents want for their children,” conservative scholar Emmett McGroarty told The Daily Signal, adding:

What parents want is for their children to know the great minds in history [and] literature, and to understand scientific thought and philosophy and math. But this vision has been replaced with a national progressive view of education that is really geared toward producing lower-quality workers, giving children a lower-quality education that puts them two to three years behind the top performing students in other countries.

The idea behind reforms proposed by the American Legislative Exchange Council is that federal bureaucrats shouldn’t be able to control state spending to the point of imposing policy preferences on unsuspecting taxpayers without their input.

The time has come to “push back against federal overreach,” proponents argue.

The bills, outlined in the legislative council’s August meeting, are under consideration in state legislative sessions underway in South Carolina and Indiana. West Virginia, Oklahoma, and Colorado are among other states expected to pursue their own versions of the proposals later this year.

The main bill, titled “Reforming How Federal Grants Are Provided to the State,” calls for state officials to perform a cost-benefit analysis of federal grant proposals and to obtain the approval of the state’s governor before an application for a grant is submitted.

A separate bill provides for creating an economic analysis unit in either a state’s legislature or executive branch to evaluate the impact of federal grants on state finances.

Indiana state Sen. John Ruckelshaus, a Republican, told The Daily Signal that he sees an opportunity to restore accountability and transparency in the grant-making process.

“Anytime you are dealing with the federal government, even where there are good intentions, there can be a lot of strings and edicts attached to programs,” Ruckelshaus said. “That’s why we need an exhaustive analysis up front of each grant proposal. You might fall in love with a program today that could be tomorrow’s nightmare, because of all the strings attached.”

Ruckelshaus introduced his version of the proposals for consideration in Indiana’s legislative session, which ends in April.

“In the last 50 years, there has been a loss of autonomy to the states,” Erin Tuttle said in an interview with The Daily Signal, adding:

Federal grants have become the preferred tool for the federal government to regulate the states, with a two-part approach. One is financial, because it is often politically unpalatable to get rid of a program once it starts and the states have to step in with their own funding to cover the costs once a federal grant runs out.

The other part impacts policy because federal agencies sometimes put in conditions that may not be faithful to what Congress intended, and you have a situation where the federal agencies are creating laws the states must follow in exchange for receiving federal funding.

McGroarty and Tuttle crafted the proposals when they were policy analysts with the American Principles Project Foundation. That Washington-based nonprofit describes itself as a think tank devoted to advancing the ideals of the American founding.

Members of the American Legislative Exchange Council adopted the proposals as model legislation.

“I introduced these bills in South Carolina in order to give the state some tools to push back against federal intrusion into citizens’ lives and their control over state government,” South Carolina state Rep. Alan Clemmons, a Republican who also serves as chairman of ALEC, said in an email to The Daily Signal, adding:

These commonsense, bite-sized bills will help people realize that it’s not just the president and Congress who have an obligation to bring back constitutional order. There are measures we can, and must, fight for in our statehouses.

For over a hundred years, in every corner of government, we’ve allowed the erosion of the constitutional structure—the bulwark of our liberty. Now, we have to fight for the return to constitutional order in the statehouses, in Congress, and in the courts. Each victory, each fight will embolden citizens with hope and inspire the next, necessary fight.

One example of eroded constitutional structures is where unelected administrators at the federal and state level are able to set policies without the approval of elected officials, Tuttle told The Daily Signal.

“This is why we have the requirement in the bill that says state governors have to sign off on approving any grants,” she said. “Some of the grant agreements are hundreds of pages long and are very legal with lots of jargon, and they go beyond what say a school superintendent, for example, should be permitted to agree to because they result in adding more spending programs.”

Unless the states work successfully to wrest control from federal bureaucrats, a real danger exists that Americans could suffer the same fate as the citizens of countries that belong to the European Union, McGroarty said.

“We as citizens, we have lost a tremendous amount of control over policy development,” McGroarty told The Daily Signal, adding:

It’s the federal administrative state that is setting the narrative on issue after issue, and until we wake up we are going to continue go down that road. I would say we are in danger of becoming another European Union, where policies are driven from the top down with the government directing citizens, when it should be the other way around.

But McGroarty said he does see hope in the form of the model legislation.

“These bills provide states with commonsense tools to manage their regulatory and grants processes,” he said. “They will give legislators information necessary for sound decision-making and for pushing back against federal overreach. I hope they will spark a culture that everyone—citizens and legislators—can and must do their part to restore true constitutional governance.”

“There are short-term benefits for politicians who get involved with federal grants but leave the long-term costs for someone else,” she said. “It takes someone with backbone to stop this cycle. More often than not, the grants cost more than what they are worth.”

McGroarty and Tuttle are co-authors of “Deconstructing the Administrative State” with Jane Robbins, a senior fellow with the foundation.