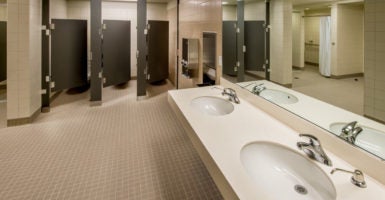 Washington, D.C., required a restaurant to post a sign that reads, "All individuals are allowed to use the restroom that corresponds to their gender identity or expression." (Photo: alacatr/Getty Images)

What’s the point of a women’s restroom if you don’t care who uses it?

That’s a question on the minds of a lot of D.C. restaurant owners this week, after city officials dropped the hammer on Chinatown’s Cuba Libre. There, trying to keep customers safe will cost you your job—and a whole lot more.

It’s an amazing world we live in. Our schools spend years teaching biology, and then the government punishes people for recognizing it.

The owners of Cuba Libre are still reeling from the decision handed down by D.C. Attorney General Karl Racine after an incident last June when a man who identified as transgender tried to use the women’s restroom. Some employees saw Clyde Clymer go into the bathroom and followed him in, asking for ID.

It was a reasonable request, after all. If the ID said Clymer was female, then the staff would let him use the women’s restroom. (Although, in D.C., your sex designation isn’t exactly difficult to change on your identification.) If Clymer had shown the staffer a legal ID showing that he was at least legally female, that probably would have been the end of the incident.

But Clymer refused to show ID (and may have been belligerent), so he was asked to leave. That’s when Clymer called the police.

Now, seven months later, D.C. is making an example out of Cuba Libre.

Racine fined the restaurant $7,000 for violating the District’s Human Rights Act, ordered the owners to rewrite its corporate policy, undergo extensive sensitivity training, and post a sign that reads, “All individuals are allowed to use the restroom that corresponds to their gender identity or expression.”

Family Research Council’s Peter Sprigg was astonished. After all, he argues, “No court has (yet) said that it is illegal or unconstitutional to have separate restrooms for men and women. The restaurant staff assumed that only women should use the women’s restroom. That is entirely reasonable.”

The whole incident actually does a great job illustrating a lot of Americans’ concerns about these policies for public safety. As we’ve said several times, our worry isn’t that people who identify as transgender will be sexual predators. (Although the presence of men in the women’s bathroom makes it uncomfortable enough as it is). The fear is that actual sexual predators could exploit these transgender bathroom policies by posing as transgender to get access to women.

Our opponents say that concern is misplaced because “misconduct in the restroom would still be illegal.” The goal is not to punish misconduct after it happens—we want to stop it from taking place at all. We want to prevent the potential abuse and the trauma that can scar someone for life. And a key prevention measure is not allowing men to go into the women’s room—and taking steps to prevent it when you see it happening.

If libre means “free,” this restaurant is anything but. That’s inexcusable anywhere, but in America’s capital city—blocks from the documents that guarantee any business the liberty to operate the way it sees fit—it’s shameful. At least in D.C., safety is obviously not on the menu.