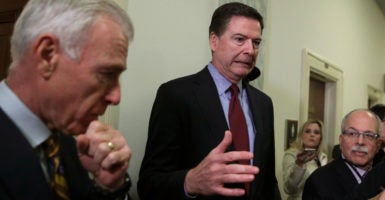 The Roman satirist Juvenal, in a famous passage, asked, “Who will watch the watchmen?”

That problem of policing the police has troubled Western thinkers from Plato to the American Founders.

The framers of the Constitution set in place a brilliant series of legislative, executive, and judicial checks and balances to thwart the abuse of power by the powerful. Their pessimistic take on human nature was that all power corrupts. Inevitably, elites will insist that they should not be subject to the very rules they enforce on others.

The sexual abuse crises within the contemporary Catholic Church arose from the de facto exemptions from the law given to priests. Too many assumed that men of faith were exempt from prosecution because as holy men they would be the last to violate the trust of minors.

One of the ironic things about the Me Too movement was that some of the worst offenders were powerful progressive men such as Hollywood producer Harvey Weinstein, NBC host Matt Lauer, and PBS interviewer Charlie Rose. They all apparently believed that their loud liberal credentials gave them immunity from being held accountable for their harassment.

Some of the feminist organizers of the recent Women’s March, such as Tamika Mallory and Linda Sarsour, have been linked to racist and anti-Semitic Nation of Islam leader Louis Farrakhan. They apparently assumed that as supposed victims, they could not be viewed as being sympathetic to victimizers.

Given President Donald Trump’s unconventional background, his wheeler-dealer past, and the hatred he incurs from the left, few ever give him the benefit of the doubt. The paradoxical result is that his tenure in just two years has become the most investigated, the most audited, and the most closely examined presidency in history.

Half the country apparently believes Trump cannot be trusted. The result is that everything he says and does is the object of pushback, opposition, audit.

In contrast, his most frequent accusers—the media—have set themselves up as the country’s moral paragon. Journalists now see themselves as social justice warriors who are immune from the scrutiny to which they subject others.

The result of such self-righteous moral exemption has led to journalism’s nadir, with an unprecedented lack of public confidence in the media. “Fake news” now abounds, from CNN to BuzzFeed.

Recently, BuzzFeed (which first published the unsubstantiated Steele dossier) alleged that there was proof Trump had ordered his erstwhile lawyer, convicted felon Michael Cohen, to lie. One of the co-authors of the hit piece, Anthony Cormier, admits that he has not seen the evidence his sources cited. The other co-author, Jason Leopold, was once convicted of grand larceny and has admitted to substance abuse and lying. Leopold has been cited for past unethical journalistic practices and has been disavowed by a number of his past employers. BuzzFeed has stood by the story.

No matter. Cormier and Leopold’s reporting was published as an ethical takedown of the president of the United States based on supposed sources inside the special counsel’s investigation.

After a few hours, the BuzzFeed yarn drew a rare rebuke from special counsel Robert Mueller’s team, which disputed the veracity of the story.

The Department of Justice and the FBI are supposed to be our pre-eminent guardians of justice. But former Director James Comey, former Deputy Director Andrew McCabe, former General Counsel James Baker, several other top FBI officials have either resigned, retired, or been fired—and some may soon be facing indictments themselves.

On 245 occasions in sworn testimony before Congress, Comey answered that he either did not know the answers to questions or could not remember the details of events. Had any private citizen tried such stonewalling in an investigation, he or she would likely end up in jail.

But Comey apparently surmised that even fired FBI directors are somehow still exempt from the sort of demands the agency makes of others.

With Mueller, the question is not whether he should investigate possible Russian collusion in the 2016 election, but whether we need a special, special counsel to oversee the conduct of Mueller’s team itself.

Peter Strzok, a former member of Mueller’s team, violated a number of ethical protocols. He was romantically involved with another FBI official, Lisa Page, and the two exchanged a number of text messages critical of Trump.

One of Mueller’s top prosecutors, Andrew Weissmann, was warned in August 2016 by Bruce Ohr, a former associate deputy attorney general, about the suspect, biased, and unverified nature of the Steele dossier. But Weissmann apparently didn’t mind that the dossier was used by his colleagues to deceive the Foreign Intelligence Surveillance Court into granting a warrant to spy on an American citizen.

Call it karma or attribute it to Nemesis, the Greek goddess of retribution, but when anyone assumes that they should be uniquely above all suspicion, they will eventually earn suspicion.