The Covington Catholic Story Nearly Ruined Kids’ Lives. It Was Fake News at Its Worst. 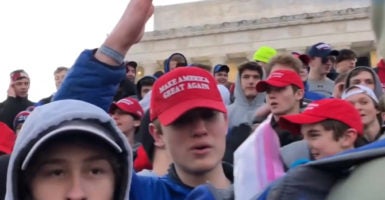 Covington Catholic High School became the epicenter of a controversy after the media portrayed an out-of-context video clip of students' interaction with a Native American man. (Photo: Screenshot via Today Show/NBC)

Only among the most deranged partisans could a universal sports ritual, a common high school activity, a typical teen face, and patriotic headgear be construed as evil symbols of patriarchal oppression.

These, however, are the soul-sapping, lunacy-inducing times in which we live.

Nobody loses their marbles when black NBA stars make the universal “OK” gesture with one hand. Or two. Or when the elite athletes hold up the sign to the sky, turn two of them into triumphant eye goggles, stir the pot, sweep the floor, or dramatically holster their finger-trios like weapons.

It’s all in good fun.

But when reputation-destroying agitators plundered the photo collection of the Covington Catholic High School basketball team in search of evidence to bolster their prefabricated narrative that the white Kentucky boys must, must, must be unrepentant bigots, the three-point celebration transmogrified into menacing proof of racism.

Liberal pot-stirrers tweeted celebrities and journalists an image purporting to show that the Covington kids—still under siege after being slandered last week at the March for Life rally by Native American agitator Nathan Phillips—had flashed white supremacy signs. The teens were pictured on the sidelines of a basketball court in their uniforms, paying tribute to a teammate who had just scored.

No, they did not hail him with Hitler salutes, but with the innocuous three-point, A-OK sign.

Undeterred by basketball fans who futilely tried to explain the actual meaning of the hand gesture, monomaniacal left-wing detectives marked all the Covington athletes’ fingers with cuckoo red-font circles and disseminated their fevered forensic analysis across social media with enraged captions, including this one sent to the pope:

In truth, internet trolls had ripped a screenshot from the team’s video montage of pep rallies—where students had dressed up as nerds, businessmen, and Hawaiians or painted themselves blue, white, and (gasp!) black at various competitions.

An alum, Ryan Toler, tried to correct the record, pointing out that he was pictured in the 7-year-old photo: “I’m shown in the background of this image. ITS CALLED A BLACKOUT THEME. WE HAD SCHOOL SPIRIT. WE DO THIS TO EVERY SCHOOL NO MATTER THE RACE OR ETHNICITY. Stop trying to force a fake story to drive your false narrative.”

But the media manufacturers of racism won’t stop because the ideological incentives to convict first and verify later are far too strong. Time after time, liberals see racism where it doesn’t exist, fabricate it when they can’t find it, and ignore it within their own ranks.

They didn’t stop after hysterically spreading campus hate crime fakery cooked up at my alma mater Oberlin College, where excitable nitwits claimed a student walking around with a blanket wrapped around her was a lurking racist in a KKK hood; at Michigan State University, where a “noose” turned out to be a lost shoelace; or at Bowling Green State University, where a purported group of Klansmen turned out to be lab equipment covered with a white cloth.

They didn’t stop after attacking my Catholic high school alma mater, Holy Spirit High School in Absecon, New Jersey, four years ago, when a decades-old tradition of basketball fans dressing up in goofy costumes was falsely portrayed by USA Today as racism because students wore monkey pajamas and a giant banana (others wore a green ballerina tutu, a bumblebee suit, a jack-o’-lantern outfit and “Wizard of Oz” get-ups).

The Covington hoax is more than just the epitome of fake news. It’s a cultural Rorschach test that measures the impact of Trump-hating confirmation bias on the viewer’s intellectual honesty and emotional stability.

Those calling to protest, dox, stalk, or kill the MAGA hat-wearing Covington kids and their families over a selectively edited video planted by a foreign instigator prove, once again, that political correctness is a pathological disorder.