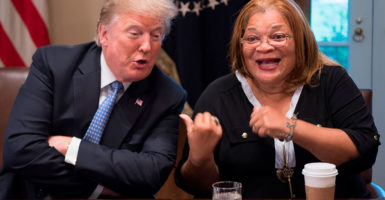 Martin Luther King Jr. Day is a moment to reflect on the life of the civil rights leader whose nonviolent activism and Christian values made America a better place. The Daily Signal spoke to his niece, Alveda King, about her uncle’s enduring legacy and her plans for honoring him. Listen to the interview on our podcast or read a lightly edited transcript below.

Rob Bluey: As we celebrate Martin Luther King Jr. Day, how has your uncle shaped our culture in America on issues like civil rights and your own life?

Alveda King: Martin Luther King Jr. was born 90 years ago in Atlanta, Georgia, as what was known as a Negro. And, of course, he grew up in a time when the South especially was segregated.

However, he was raised by parents—one whose grandparents were slaves and one whose grandparents were from Cork, Ireland. In that merit, they saw every human being as a person of worth and dignity, they raised all three of their children that way. One was my dad, Reverend A. D. King; my aunt, Christine King Farris; and Uncle M.L., Rev. Dr. Martin Luther King Jr. That was his worldview from birth and he left as a legacy that same worldview.

Rachel del Guidice:  Are there ways today that you think society and media or even others have misrepresented your uncles’ conviction on the civil rights issues?

King: Well, what has happened with my uncles’ legacy, they forget the spiritual aspect. And so as one who’s also a civil rights leader from the 20th century now to the 21st century—I was there and I marched and went to jail with those great leaders. I was a young lady, a teenage girl. However, I remember the prayer meetings, how often we came together and prayed. I remember that everything we did was founded on the Bible.

One of my favorite songs was: “Paul and Silas, were bound in jail. Had no money to pay their bail. Keep your eye on the prize. Hold on.” Of course, the prize was the love of God toward all people and the salvation of humanity.

I believe that we have not given full credence to the spiritual aspect of the message of Rev. Dr. Martin Luther King Jr., which includes sanctity of life, procreative marriage, a man and a woman marrying with a commitment, if God wills, to birth and raise children in a healthy manner. Taking care of the least of these.

The poor will always be with us, but they should never be mistreated or abused, and we should help the least of these and help all human beings. There are sins we know now and can call “crimes against humanity,” for instance: sex trafficking, abortion, mistreatment of the homeless, all these types of things. Of course, that would not have been what Martin Luther King Jr. would have wanted us to do to each other.

One of his famous quotes, “We must learn to live together as brothers,” and I’ll add, “as sisters—or perish together as fools.” He fully understood Acts 17:26: “Of one blood, God created the human race.” We’re not separate races and we’re designed to love each other.

Bluey: Thank you so much for sharing that story and perspective. I want to ask about your personal involvement because many people know that you’ve worked with your uncle and family and marched for civil rights, but fewer people might be familiar with how you became involved with the pro-life movement. Can you share about your journey and how your uncle’s beliefs have influenced your life?

King: During the 20th century, I was involved with what was called the “fair housing movement,” led by my dad, Rev. A. D. King, in concert with his brother, Martin Luther King Jr. I began to look at civil rights very closely with an understanding of how important it is to treat each other as brothers and sisters and human beings. I grew up with that philosophy.

Abortion was illegal during the lifetime of my uncle, so he would not have had a real platform against abortion. It was illegal, it was unthinkable. People were still doing that in secret somewhat.

However, in 1973, when Roe v. Wade became legal in America, then it became legal to destroy the life of the least of these. The baby in the womb had no attorney and no lawyer. It was very apparent that that was a civil right; however, that was couched and clothed in a fantasy that the baby in the womb was not a person. It was a blob of tissue, it was lump of flesh. It was OK to get an abortion because that’s not a person.

Right now, I’m executive producer of the new Roe v. Wade film that’s produced by Nick Loeb and Cathy Beckerman. Jon Voight also appears in the movie, as Nick does and I do. We are giving the real story about how that little baby in the womb was deprived of the right, deprived of a voice.

Even though, in the early days, around ’73, I still bought that story that it wasn’t a baby—I had two secret abortions and a miscarriage—in 1983 when I became born again, I realized that these were human beings, including my babies who are in heaven and I repented of all of my sins and I became a voice for life.

del Guidice: You mentioned being a voice for life. This past week on Friday, people from across the country came to the United States capital and to the mall and marched for life. How do you think this event has played a role in the pro-life movement?

King: I was invited to do the closing prayer at the March for Life. I’ve attended many of them since 2003, every year, and this year has been no exception. If you look back at the news accounts, you may not see the hundreds of thousands of people who were gathered there, but we were there, including young people.

Bluey: I want to ask about the state of race relations in America today. Rachel and I have the benefit of working for an inspiring leader in Kay Coles James here at The Heritage Foundation.

She shared with us her own experiences growing up in Richmond, Virginia, where she integrated as a young black woman in an all-white school and experienced incidents of racism, and I think we continue to have that today. What is your advice for overcoming some of those challenges and having a conversation where people might better be able to understand each other and the different perspectives that they might have growing up?

King: Kay and I served together as presidential appointees in the George W. Bush administration and tremendous foundations were laid during those days. Both of us having come from experiences of racism, but have also come to the reality through nurture and nature that we are one human race. Skin color does not denote or define who we are, and that’s the message that’s still very relevant today. Treating each other as human beings, having the ability to love each other, to listen to each other, to communicate with each other, and to resolve our differences nonviolently in a loving and, for me, a Christ-like manner.

That’s something that I do share with Heritage and Heritage has been such a wonderful research institution for me throughout the years. I’m very grateful for what Heritage brings not only to my table, but to the table in the world.

del Guidice: As the director of civil rights for the unborn at Priests for Life, what particular issues or trends in today’s American society do you think your uncle might be troubled by today and why?

King: I met Rev. Frank Pavone, the national director of Priests for Life, and he was reading a quote from one of my uncle’s Christmas sermons, and it basically says, “When we learn to value the human personality, we won’t hate anybody.”

The baby in the womb, all the way through the sick, the elderly, the poor, the young, the old—it doesn’t matter. We could be rich, poor, no matter what color our skin is, we are human beings, and that is the message.

With civil rights for the unborn—and that’s my department—I say a woman has a right to choose what she does with her body; the baby’s not her body. Where’s the lawyer for the baby? How can the dream survive if we murder the children? That’s the message that we continue to carry. We believe that people are now listening.

Bluey: How do you personally observe Martin Luther King Jr. Day? Are there any traditions that you and your family have in celebrating his life?

King: There’s a commemorative service at the Heritage Sanctuary of Ebenezer Baptist Church. I’ll join members of my family there for a day of service and loving others. I believe that if we continue to work together as human beings, one blood as in Acts 17:26, we will continue to overcome some of the obstacles that often try to beset us. We do keep pressing on toward the mark of our higher calling in Christ Jesus.

Del Guidice: Well, Dr. King, thank you so much for joining The Daily Signal today.